You are at:Home»Current in Carmel»Carmel Cover Stories»Too healthy?: Influx of medical facilities in Hamilton County has side effects, experts say

Hamilton County residents seemed to be struck with recurring déjà vu in 2018: Every few months, the headlines announced plans for another new or expanded hospital.

That’s not to mention the new urgent care centers, freestanding emergency rooms and other medical facilities popping up throughout the area.

While the influx of health care options may help Hamilton County residents feel more secure should they suffer a medical emergency, its leaders are hitting the brakes on some of the proposed projects, saying an abundance of hospitals isn’t necessarily a good thing.

“This has become big business,” Carmel Mayor Jim Brainard said. “It’s not as if we’re a rural community that doesn’t have adequate services. We have all the medical services we need, and we have a very competitive war between the hospital systems. We don’t need to continue to ask the taxpayers to subsidize their city services for more hospitals.”

Others, however, insist Hamilton County residents win by having a variety of health care options in their own backyard.

“It’s almost like by being co-located, people view it as a center of health care excellence, because you know they’re all competing,” said Seth Warren, president and CEO of Riverview Health, a Hamilton County-owned system with hospitals in Noblesville and Westfield. “It raises the level of care across the board, so I think there is some benefit to having competitors close to each other.” 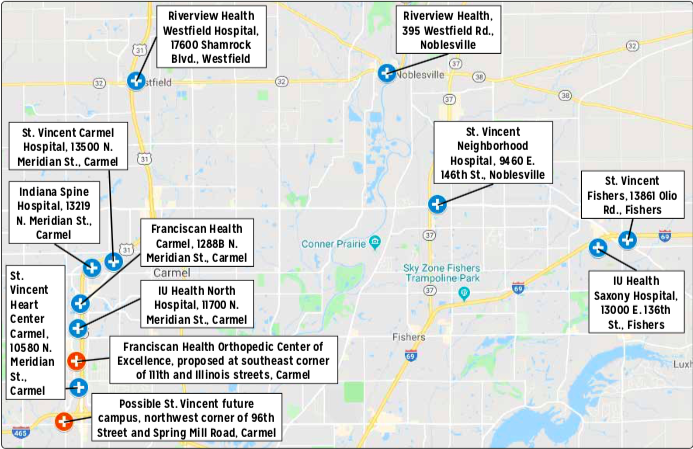 While the number of health care facilities expanding in Hamilton County seems excessive to some, it’s not surprising to Brian Tabor, president of the Indiana Hospital Association.

With a population that has increased 18 percent since 2010, and the county expected to be Indiana’s second-most populous by 2050, according to the Indiana Business Research Center, Tabor said it makes sense that the number of hospitals would also rapidly expand.

“It’s not so out of line when you compare it to other populous counties in Indiana,” Tabor said. “It’s just that Hamilton County is still being rapidly developed.”

Tabor also said that low interest rates have led to recent expansions of health systems throughout the state and nation.

Much of the new development Tabor is seeing has been for specialized services – such as Franciscan’s proposed orthopedic hospital – as opposed to traditional full-service hospitals. Officials from Franciscan and St. Vincent declined interviews for this story.

In addition to Riverview’s new full-service hospital in Westfield, it is preparing to open four freestanding emergency rooms/urgent care centers in Fishers, north Carmel, west Carmel and Nora by 2020.

Warren said Riverview explores several factors when considering a new facility, such as demographics, traffic and growth patterns. He said the area’s health care systems compete and cooperate with each other and that they’re constantly working to provide the best service to attract the most business.

“If you have too many craft brewhouses together, some are going to suffer because there are only so many people who go to breweries,” said Warren, comparing potential health care oversaturation to the restaurant industry. “We’ve been very circumspect on where we put our services and what services we offer at those locations based on what we perceive as the community need.”

Alicia Schulhof, president of the IU Health North suburban area, said Hamilton County is the healthiest in the state and an attractive place to live and work, so IU Health is working to identify specific issues in the county and provide services to address them. The future $55 million cancer center in Carmel, which is expected to open in early 2020, is an example, she said.

“I think it’s going to continue to be an aggressive marketplace, so we will continue to differentiate ourselves with our services and our culture,” she said.

In Carmel, city leaders have worked for decades to become a place where people want to live and grow a business. But not all businesses are created equal.

“It’s a safe area and we have good transportation systems, so businesses of all sorts want to locate here,” Brainard said. “My concern is that we don’t need more hospital beds, and the infrastructure supporting those hospitals is very expensive for the taxpayers. I’m trying to protect the taxpayers.”

All of the hospital systems in Hamilton County are nonprofits, meaning they are exempt from paying property taxes on land they own. Many seek to build in busy corridors that are zoned for business development, leaving cities without tax revenue they could have received. At the same time, they use city services, such as police and fire protection.

To address the issue, some health care systems agree to make payments in lieu of taxes, or PILOT, for a set amount of time or for perpetuity. The payments replace the property tax revenue that would have been generated if a for-profit business had developed the site. In Carmel, for example, IU Health has agreed to make payments based on the property’s assessed value for more than 60 years.

More recently, city leaders have buckled down on the issue. When Franciscan officials proposed PILOT for 25 years, city councilors responded that they would not support the new orthopedic hospital if it wouldn’t agree to PILOT for perpetuity. The issue remains in a council committee as of press time.

State leaders are paying attention, too. After Carmel and Indianapolis residents voiced opposition to St. Vincent purchasing land for a potential facility on Spring Mill Road, State Sen. John Ruckelshaus filed a bill for the 2019 legislative session that would require hospitals to prove a need in an area before building a new facility.

“The hospitals and health care providers are clustering these hospitals in areas where fully insured patients live, which is in the higher socioeconomic areas,” said Ruckelshaus, adding that this is happening across the nation. “They’re chasing that fully insured patient almost as a cost subsidy to Medicare and Medicaid, where they lose money.”

Tabor, of the Indiana Hospital Association, however, downplayed that as a driving factor in hospitals choosing new locations. He pointed to several recent hospital expansions – such as a $175 million investment to build a new Community Hospital East in Indianapolis – to show that hospital systems are continuing to invest in areas that aren’t as well-insured as Hamilton County.

“Some of our concerns with the legislation Sen. Ruckelshaus has proposed is that it could impede or slow down that innovation, so we don’t support it,” he said.

Ruckelshaus joked that his legislation has become a “jobs bill” because of all the lobbyists that have been hired to stifle it. He’s filed another bill that calls for a study of the issue if the first bill doesn’t move forward.

“I think the discussion is very worthwhile,” he said.

Tabor said a shortage of employees is what could keep the market from becoming oversaturated.

“When you have multiple facilities, you have to have the workforce, the physicians, the nurses and all the other medical professionals,” he said. “Hospitals always spend a lot of time recruiting. That’s why I think you’re going to see a leveling out, because the workforce is fairly limited.”

“We have a lot of very creative things on our radar,” she said. “We have unique offerings to meet the needs of all generations.”

Riverview Health’s Warren said attracting and retaining employees is a constant challenge and that some of Riverview’s workers on the lower end of the pay scale commute from Anderson because affordable housing is difficult to find in many parts of Hamilton County.

“Like many businesses in Hamilton County, we do struggle at times to recruit new employees, especially those at the lower end of the wage scale,” Warren said. “With low unemployment rates, the growth in this area and more competition from a number of industries, there are a limited number of available staff.”