You are at:Home»Current in Noblesville»Noblesville Cover Stories»Story of Survival: Local author tells story of her great-great-grandfather settling in Indiana in the 1800s

Charlotte Reynolds has spent the past decade learning the history of her family.

In November 2018, Deep River Books published her novel, “He Called Himself a Barnstormer,” a 29-chapter historical fiction centered on the life of her great-great-grandfather, James Scott.

“He was born in 1800 and died in 1890. His granddaughter was my grandmother. She passed down stories, but there wasn’t a lot that I remembered,” Reynolds said. “I started writing it 10 years ago. It took me about eight years because I had to study a lot of the history because it’s a historical novel. I took time off to read other books, so there’s a lot of the history involved.”

Reynolds said most of what she learned about Scott’s life was from an article written by a great uncle and passed down.

“I came to know about him because he had a grandson who wrote for the Christian Standard, which is a publication out of the Christian church,” Reynolds said. “ In 1910, he gave a rundown of what happened to him in his life, and I took that and studied the history behind the facts for my book. The history is true, but there were a lot of pieces I had to fill in with my imagination. But the basic things that happened to him really happened.”

The original article from the Christian Standard that Reynolds based her book on is included at the back of the novel, along with a photo of her grandfather.

“He lived a very interesting life,” Reynolds said. “He lived in New York, but eventually he came to Ohio, then Indiana, settling in Adams County, but there was about 10 years of his life he lived in Madison County before he returned to Adams County and Jay County.”

Scott’s life, particularly in his early years, was adventure-filled. According to the Christian Standard article, before the age of 12 he completed a shipping and sailing apprenticeship, traveling to shores all across Europe. He would later marry and continue in the shipping trade with his father. Scott and his father sailed for Europe in the fall of 1822 with a cargo of flax but were overtaken by a pirate sloop called The Bald Hornet. Scott, then 22, his father and several other members of the crew were held prisoner.

Eventually, the ship sailed into a storm and crashed into the rocks of a tropical island. All died except Scott, who was stranded on the island for the next two years before being saved by a passing ship and taken to New York.

The first lines of Reynolds’ novel place Scott on the rocks among the ship’s wreckage with his father.

After he left the shipping trade, Scott became a preacher and settled in Indiana permanently in 1840. He moved to Madison County during the Civil War.

Reynolds was inspired to write the novel after trying to tell Scott’s story to her son, Tom.

“In an attempt to encourage him, I wrote the first paragraph,” Reynolds said. “I became so absorbed and intrigued with the idea, I could not quit writing, so the next thing you know, I’m writing the book.”

“He Called Himself a Barnstormer” is available at Amazon and Barnes & Noble. For more, visit deepriverbooks.com. 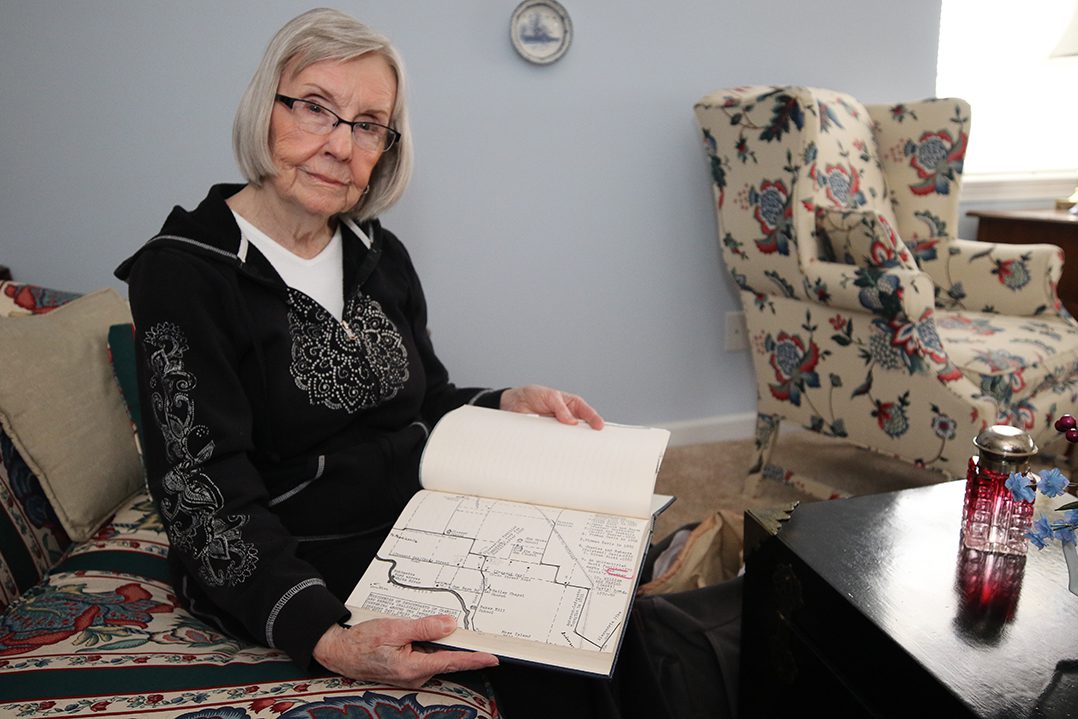 Charlotte Reynolds flips through a passed-down book of her family’s history.

Charlotte Reynolds, who goes by her middle name, Joanne, is a retired teacher. She earned a master’s degree from Ball State University. In 1977, she became a “pro-family” delegate to the International Women’s Year Conference in Houston and wrote a book about the experience. She lives in Noblesville and is widowed with three adult children.