The Grammy Award-winning tabla drum star from India will bring his Masters of Percussion show to the Palladium in Carmel at 7:30 p.m. April 18.

“It’s always a challenge to play for a new audience and anxiously await their reaction to it,” he said. 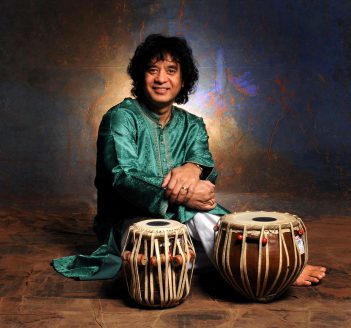 Zakir Hussain and the Masters of Percussion will perform April 18 at the Palladium. (Submitted photo)

Hussain said he was last in the Indianapolis area in the mid-1990s.

“I was a young man with no gray hair and I was playing with a kind of a combo group with a jazz guitarist named John McLaughlin,” Hussain said of the guitar legend. “Once before that, I came to play with (sitar legend) Ravi Shankar.”

The concert is instrumental with some scat singing.

“Most of the learning we received in India as far as rhythm is also vocalized,” he said. “It has a rhythmic, melanotic element involved in it. There are no songs, but maybe I should do my Frank Sinatra cover.”

Hussain, 68, doesn’t like to label himself as a tabla drum flagbearer.

“It’s a team effort,” Hussain said. “If I play and go away after playing one concert, if there are no other tabla players following, the memory dies. It doesn’t nurture. It doesn’t preserve. I’d be the first to admit I’m not the best tabla player on the planet. I’m one of the good ones. I got to be in the place where a tabla player was needed and was picked up, whether it was George Harrison, Van Morrison, Earth, Wind & Fire or Ravi Shankar or Mickey Hart or John McLaughlin. They happened to look for a tabla player at that time in the early ’70s and I was right there and asked to join in on the musical adventures they were embarking on. It allowed me to be part of these incredible experiences and established me as somebody who might be the guy to go to.”

Hussain, who has homes in India and California, said he hopes his performance will encourage audience members to seek out other tabla players.

Joining Hussain for the concert are the Kerala Drummers of India’s southwestern coast.

“There is this village where everyone in the village drums,” Hussain said. “They have practiced rhythm way of life for more than 2,000 years.”