You are at:Home»Current in Noblesville»Noblesville Cover Stories»Year of Jubilee: Noblesville photographer’s personal journey grows into mission to help Nigerian girl

Matt Doudt never had big plans to return to his birthplace of Jos, Nigeria.

Doudt lived in Jos, where his parents were teachers and missionaries, until he was 2 1/2 years old. The family moved to North Manchester, Ind., where he largely grew up.

Doudt’s decision to return to Nigeria was a somewhat quick after his father volunteered to be an interim teacher at a refugee camp for people who fled terrorist group Boko Haram.

“I was born there 50 years ago in January 1969,” Doudt said. “My sister was born two years later. We came home shortly after she was born, and I had never been back.”

Doudt, who works as a full-time photographer in Noblesville and the surrounding area, said the weeklong trip was meant to be a personal journey and a unique opportunity to capture images. But after meeting a young girl in the camp, his purpose for visiting changed dramatically. 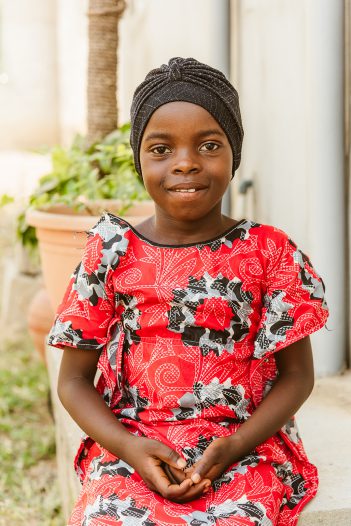 Mariyamu, 7, was born with spina bifida and recently had surgery to remove a large lump at the base of her back, letting her return to school full time in addition to relieving physical restrictions the mass caused. (Submitted photos)

“The little girl, she’s 7, her name is Mariyamu. She has spina bifida, which cannot be fixed, but she had a bump at the base of her spine that was growing,” Doudt said. “She was starting to limp, had some numbness in her feet and couldn’t control her bathroom use. She’s at a refugee camp, so she didn’t have access to diapers all the time, which meant she couldn’t go to school. For Africans, especially refugees, education is their only way out.”

Doudt took to Facebook for support. He posted a portrait of Mariyamu and asked for donations for the $1,800 surgery to remove the lump from her back. Within hours, the money was raised from friends and family.

“Now, she can control her bathroom use, she can walk without a limp and she can go to school,” Doudt said. “It’s amazing.”

Mariyamu is a resident of the Gurku IDP Camp.

“In Nigeria, they have refugee camps for internally displaced people, called IDPs, and it’s basically Nigerians that live in an area where Boko Haram has been really violent and taken over their villages, and they’ve fled,” Doudt said. “So, unlike in Lebanon where you have Syrian refugees coming from another country, this is all within the country. The government has not been able to stop Boko Haram in certain areas. There are no camps for displaced Nigerians. This camp started out as a small tent camp, but very quickly, they decided to make it into a new little village. These people have decided that they’re not going back home.”

“I don’t ever want to go just as a tourist,” he said. “Part of what I did this time was my own personal journey. There’s this really cool thing in the Old Testament and Jewish history called the Year of Jubilee. Every 50 years, everybody returned home. People who were in jail, people who had debt, all of that was forgiven. It was like a year of going back to the beginning and starting over. Because I turned 50 this year, it was just really cool that my dad and I had this experience and that I got to go back to my birthplace.”

PHOTOGRAPHY FOR A CAUSE

For years, Matt Doudt has been a photographer, shooting weddings, senior and family portraits and more, but his photography work with mission groups began in 2013 when he was invited to go to Beirut, Lebanon on a mission trip

“We were there two weeks. I took my camera and took a ton of pictures, and they gave me access to their Facebook page,” Doudt said. “ So every day, I’d take pictures and told a story. Their response to me was great, because they had never had so much interaction with people who were donating. I’ve now been to Beirut five or six times, got to go to England, the Congo. It became this great thing where I shoot (photos) all day, edit all night and post to Facebook. These (mission) groups have found that it just helps their donors feel more connected to the cause, and I love it.”

Doudt also is involved in a camp in Martinsville for 18- to 35-year-old adults who are wheelchair users.

“About half of them have cerebral palsy, spina bifida or genetically born that way, but the other half are spinal cord injuries, people that have had sports accidents or car accidents,” Doudt said. “This is my fourth year involved with them, but I do the same thing. I live with them for a week, take pictures, post pictures every day and then give them a large collection of pictures for them to use for marketing the camp throughout the year.”

Doudt also volunteers with Janus Developmental Services in Noblesville and is planning his next trip to Beirut in October.

“I’ve really fallen in love with this type of work,” Doudt said. “Impactful, emotional photos can be extremely helpful.”