Before their weekly meetings, girls in Boy Scouts of America Troop 107 talk about merit badges, ranking up and camping trips. The girls range from ages 11 to 16 and are trailblazers in the first female-only Scouts Boy Scout troop in Westfield. The troop launched in February.

“Basically, Scouts BSA is a single-gender troop. We are a girls’ troop, the female troop, and we are linked with 107, which is the boys troop,” Scoutmaster Deb Thomas said. “That means our charter organization and our adult committees are the same.”

Although the troops’ bank accounts are separate, they share supplies and also expertise, which, according to Thomas, Troop 107 has plenty of both.

Although the troops aren’t co-ed, some of the activities will be completed together. 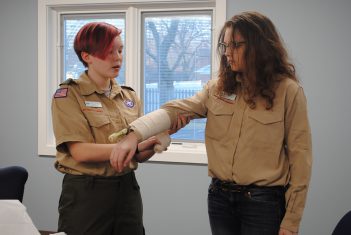 “The troops are not co-ed. They are all girl or all boy, but since we are linking, we can do some things together,” Thomas said. “At a typical troop meeting, both troops show up. Our opening is one big with the pledge, the promise and the outdoor code and one or two quick announcements. After the opening ceremonies are done, the boys go off and do their thing and girls do their thing in separate areas of the church. At the end of the meeting, they all get together again for closing.”

“Right now, we are going to be doing the same outings as the boys,” Thomas said. “One benefit of having a linked troop is the boys’ troop has been around for a very long time and they have a trailer full of camping gear we can use. That’s a big benefit right there. We share all that gear so we don’t have to go buy all that.”

Although the troops share gear, they perform their own activities at camps.

Brianna Kishel, 17, a junior at Westfield High School, is a member of the female troop.  At her age, she typically would only have one year to achieve her Eagle Scout rank, but BSA has changed the rules to allow new Scouts a chance to earn the rank.

Although Kishel will get an extension, she still has lots of work to complete and needs to be strategic with her schedule. Specifically, some Scouting ranks require the Scout be in that rank for a certain amount of time before ranking up.

“Basically, I have to analyze the requirements really in-depth. You have to think about what’s going to take you a certain amount of time,” she said. “I can learn things (like merit badges) at any time if I put the dedication into it, but you have to be in certain leadership positions for certain amounts of time. We have to space it out and see how much wiggle room I have.”

Kishel was a Girl Scout until sixth grade, when she decided not continue in the organization. She looks foward to camping opportunites with the BSA.

“I’m excited to camp more and focus on skills for outdoor living,” she said. “Everybody here is so cool, I really like all my troop mates.”

For more on Troop 107, email Immediate Past Scoutmaster Kevin Mershimer at kevinmershimer2003@yahoo.com. 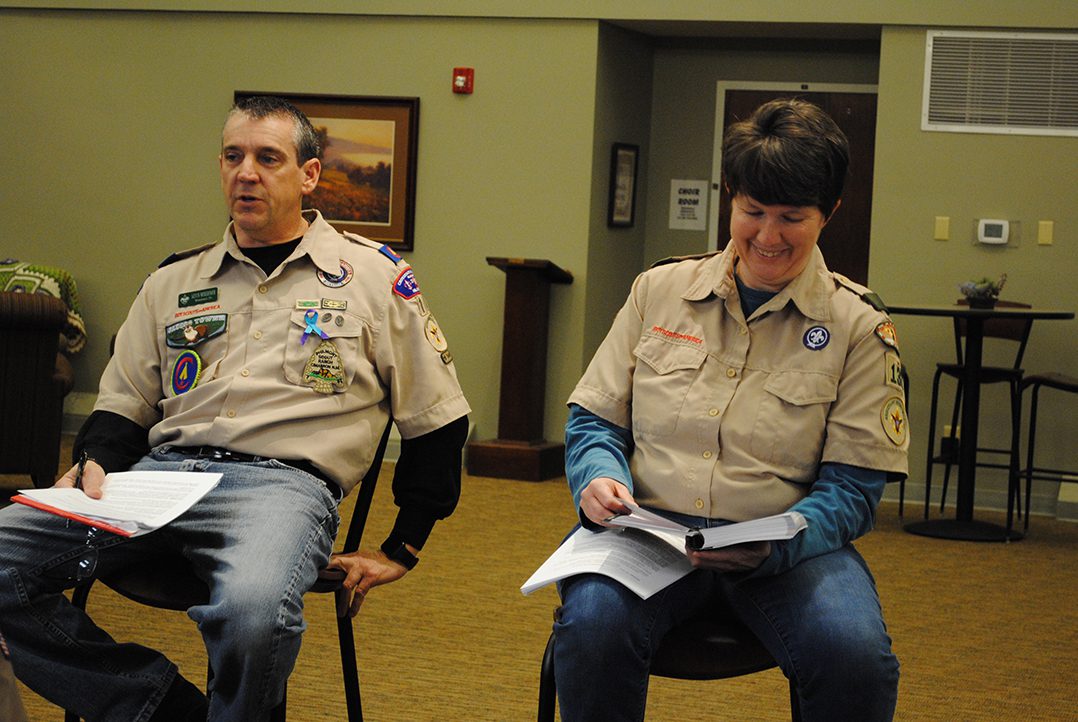 The difference between Scouts BSA and Girl Scouts

Scouts BSA Troop 107 Scoutmaster Deb Thomas wants to ensure that although Troop 107 may have formed a girls’ troop through Scouts BSA, it doesn’t take away from the importance of Girl Scouts, which is a separate program. Thomas said one isn’t better than the other.

“Keep in mind BSA is a national organization and they’ve had co-ed programs for decades. Those organizations are great, but the girls have options, so they can pick,” Thomas said. “Most girls (in BSA) I know are still in Girl Scouts. They can do both. They just have choices now. It’s like being on two different dance teams or with other clubs they do. They can play soccer in a community club but also play on the school’s team.”