The Indianapolis resident will appear in Beef & Boards Dinner Theatre’s production of “Buddy: The Buddy Holly Story” July 5 to Aug. 18. 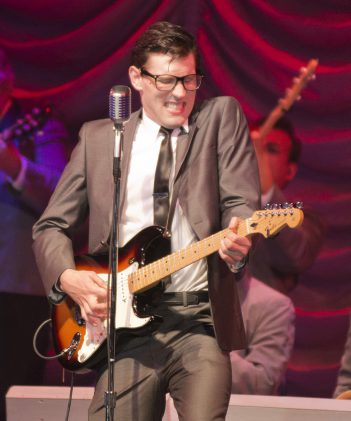 “This will be my first show acting a role as well as performing,” Daley said. “I come from a mostly musical background starting with playing in rock bands in high school and most recently completing a master’s degree at Butler University in classical bass performance.”

Daley will play Joe B. Mauldin, the bassist in Holly’s band, the Crickets. “Buddy” tells the true story of Holly’s rapid rise to fame, from the time in 1957 when “That’ll Be the Day” hit the airwaves until his tragic death in a plane crash less than two years later.

“I have always been a fan of music from Buddy’s era. It was a time when the quality of songwriting was really impressive,” Daley said.

Daley, who once taught at Carmel Music Academy, has played bass for about 18 years, playing everything from rock and jazz to classical.

Daley plans to move back to his hometown of Chicago after production’s conclusion.

The show features more than 20 of Holly’s greatest hits, including “That’ll Be The Day,” “Peggy Sue,” “Everyday,” “Oh Boy,” “Not Fade Away,” “Rave On” and “Raining In My Heart,” plus Ritchie Valens’ “La Bamba” and the Big Bopper’s “Chantilly Lace.”

Kyle Jurassic makes his Beef & Boards debut in the title role, as does Kelly Powers-Figueroa in the role of Maria Elana. Chuck Caruso, who made his Beef & Boards debut last season as the Governor in “Man of La Mancha,” returns as the Big Bopper (J.P. Richardson). Edward LaCardo, who made his debut at Beef & Boards last season as Elvis in “Million Dollar Quartet,” returns in the role of Valens. Richardson and Valens died in the plane crash with Holly.

The show is directed by Jeff Stockberger and choreographed by Doug King, with musical direction by Kristy Templet.