You are at:Home»Current in Zionsville»Zionsville Community»Zionsville’s Sophia Winters earns honor for history documentary

“Since birth I’ve been in love with horses,” said Winters, who will be a freshman at Zionsville Community High School in August. “I’ve been riding since I was 7.” 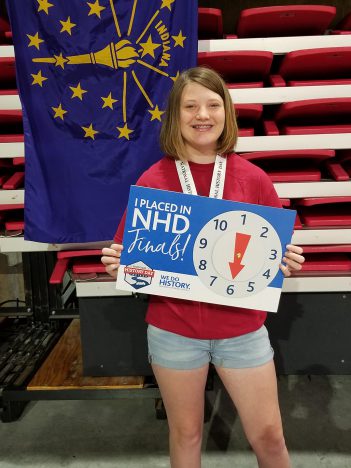 Winters placed sixth nationally in the Junior Individual Documentary category at the National Contest for the National History Day program in Washington, D.C. June 9-13. The prizes were announced during a ceremony June 13 at University of Maryland, College Park.

Winters won the Outstanding State Entry for the Junior Division for her junior individual documentary, “The Perfect Horse.”

“I didn’t expect to make it to nationals, so I was really happy with how I did and really proud,” said Winters, who attended Zionsville Middle School while working on the project. “I hope to be able to do as well next year.”

“It’s a story about horses kidnapped by the Nazis during World War II,” Winters said.

The Nazis were trying to produce the perfect horse at a Czechoslovakian breeding farm.

“It’s a really beautiful story about the German Army and the American Army working together to save these horses,” Winters said.

There was fear that if the horses weren’t saved, starving Russian troops would slaughter them for food near the end of the war in 1945.

“There isn’t a lot about this topic, so it took a lot of time to research,” Winters said. “But after a couple of weeks I was able to find some videos and a couple of photographs and I was able to put together a documentary.”

Initiatlly, the documentary was approximately seven minutes long, but it was extended to 10 minutes by the time of the national compeitition. Winters wrote a script and recorded narration to go along with the video and photos.