“There are only 30 cities in the United States that can say they host a (NFL) training camp, so just that alone puts Westfield on the map,” Verhoff said. “If you go out to the camp, you are seeing how many outside dollars are coming into this community from a business standpoint, whether that’s filling up a gas tank, feeding your family or just stopping for entertainment. I don’t have a dollar amount, but you can’t convince me it doesn’t have a very positive impact. Any other community in Indiana would love to have them if they could pull it off.” 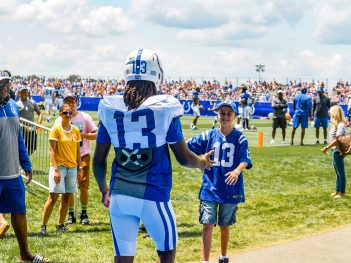 Colts’ wide receiver T.Y. Hilton gives a high-five to a fan at last year’s camp. (Submitted photos by the City of Westfield)

The Colts will hold training camp at Grand Park for the second year of a 10-year partnership. Camp practices begin July 25 and conclude Aug. 15. Admission to camp is free and tickets can be downloaded by visiting colts.com/camp.

Verhoff said training camp benefits Westfield in other ways, including introducing others to the city.

“They figure it’s a nice place and want to come back,” Verhoff said. “It’s a domino effect. People come here and find central Indiana, Hamilton County, in particularly, and Westfield definitely is a great place to live and do business. We all reap awards from that.”

“The chamber has grown by about 50 members (to approximately 420 members) since the first of this year, so that gives an idea the kind of momentum going on and I think the Colts and camp have been an integral part to play in it,” Verhoff said. “Not just that, but they are a part of that.”

Along with several special days, a camp highlight will be two joint practices with the Cleveland Browns Aug. 14 and 15. Indianapolis will play Cleveland Aug. 17 in a preseason game at Lucas Oil Stadium.

Colts Chief of Sales and Marketing Officer Roger VanDerSnick said attendance was up more than 10 percent from the Colts’ previous training camp in Anderson.

“Conservatively, we’re targeting about a 20 percent increase this year,” VanDerSnick said. “(Grand Park) is very easy to get to, obviously traffic through U.S. 31 and Keystone (Parkway) is easy, so if people are downtown or (on)  the south side (of Indianapolis), it’s not that big of a lift to get here. It’s such a great vision (Westfield) Mayor (Andy) Cook and everyone around him had to build this site and facility. Our players and football operations staff enjoy it. It’s a terrific place for us.”

Kerauno, a global tech company based in Indianapolis, is a chief sponsor of the camp. Kerauno is focused on direct communications.

“We are going to use that technology to communicate to and direct fans for training camps,” VanDerSnick said. “Email open rates are in the 30 percent range in terms of how often and how quickly people open them. If we have to tell folks there is a camp schedule change or bad weather has come up and is doing to force us to move inside, open rates on text messages are 95 percent.”

“This is a place for us to really advance the player development and player evaluation process to prepare us for the upcoming season,” VanDerSnick said. “We’ve got all the space we need. We’ve got an adjacent hotel that makes it easy for players to recover and relax with transportation back and forth. We’ve got three indoor fields when the weather is inclement. We’ve got plenty of space for weight facility, training, rehab, all the things we really need to run a professional training camp in a way to develop these world-class athletes.”

VanDerSnick said it also give the Colts a chance to welcome fans in an open, spacious manner.

“We didn’t necessarily have that at all times at other facilities,” he said. “We are looking forward to having Year 2 be even better than Year 1.”

VanDerSnick said the grandstands are close to the field for a reason.

“We want that kind of energy and vibe back and forth,” he said.

VanDerSnick said Colts staff learned if there is a heavy use day at Grand Park to have enough resources and staff to prepare.

The NFL’s clear bag policy will be in effect in all camp areas that require a ticket. To view the full schedule, visit colts.com/camp. 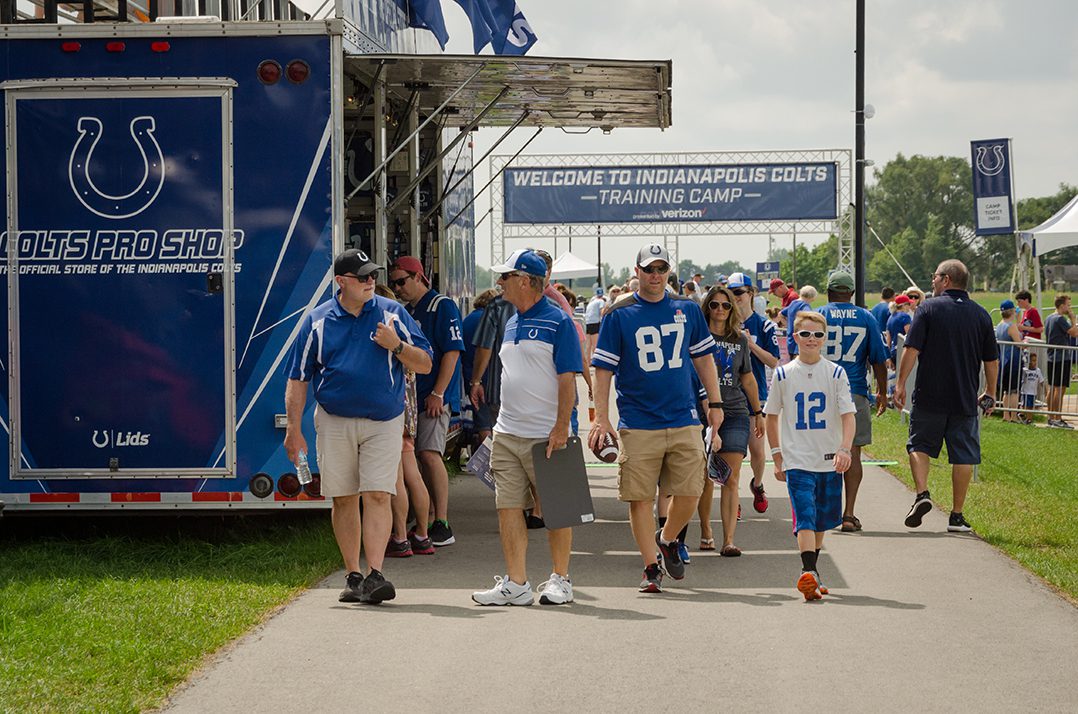 Fans file into Grand Park to watch the Colts practice.