You are at:Home»Current in Carmel»Carmel Cover Stories»In a jam: Amid improvements, county seeks additional funds to upgrade 146th Street in Carmel

When Deb Leyndyke moved into her northeast Carmel home near 146th Street and Carey Road in 2001, she enjoyed relaxing on her back patio and walking her dogs along the perimeter of the neighborhood.

She doesn’t often do those things anymore.

As Carmel and surrounding Hamilton County communities have grown, so has the traffic on 146th Street. It’s led to increased noise and motor vehicle accidents on the road, which has become one of the county’s major east-west thoroughfares.

“(146th Street) has worried me for a long time,” Leyndyke said. “Whenever I hear sirens just outside of my window, I know it’s probably because something has happened at 146th and Carey.”

Accidents at signalized intersections along 146th Street between Clay Terrace and Hazel Dell Parkway increased nearly 7 percent between 2015 and 2018, according to numbers provided by the Hamilton County Sheriff’s Office.

Leyndyke – who witnessed a car veer off the road through a fence and whose husband’s favorite car was totaled at a 146th Street intersection – is among many area residents with concerns about the road. And elected officials have taken notice, too.

“It’s an unsafe road the way it’s been designed, and we need to work together to fix it,” Carmel Mayor Jim Brainard said. “It should not be Carmel’s sole responsibility, but we can help.”

Hamilton County – which is responsible for maintaining the road – has made several improvements and has some major projects planned on the east and west sides of the county. But along the oldest stretch of the four-lane road, which seems to be most concerning to drivers, a lack of funding has made some recommended upgrades unattainable to date.

Learning from the past

Serving as a northern border of Carmel and Fishers and a southern border of Noblesville and Westfield, 146th Street touches all of the largest cities in Hamilton County. It stretches from the Boone County line on the west and connects to I-69 to the east via Campus Parkway in Noblesville.

Once a two-lane county road, Hamilton County officials met great resistance from people who lived near it in the mid-1990s when officials proposed widening it in the heart of the county. Hamilton County Commissioner Steve Dillinger, who was first elected in 1989, recalls being told he had “asphalt for brains” because he supported the project.

The county council almost didn’t fund the expansion, but when a survey showed that 87 percent of residents thought it was a good idea, it was included as part of a $70 million bond issue, Dillinger said. Because the road touched so many cities, officials from those municipalities agreed to allow the county to improve and maintain it.

“They all signed an agreement that from that time on, 146th Street would be under the control of the county all the way through,” Dillinger said. “The reason for that was to create continuity.”

The first phase of the project widened 146th Street to a four-lane road between Spring Mill and Cumberland roads, a stretch with many of the traffic concerns now. In part because of the resistance to the project, county officials said they kept the road too narrow and allowed too many curb cuts and traffic lights to appease developers and nearby residents, which has led to some of the difficulty of efficiently getting through the area now.

“The county has tried to look at what we did wrong in the past and what we can do better,” said Brad Davis, Hamilton County Highway Dept. director. “Had the people in the early days tried to limit some of that access, that whole congested area from Greyhound Pass to Allisonville Road would be a little bit different.”

Officials did learn from their mistakes. When they widened the road on the east to Campus Parkway and I-69, they predetermined where curb cuts would be and required developers to adhere to the plan. And as the county currently widens 146th Street to the Boone County line, it’s creating roundabouts and frontage roads to minimize traffic stops and future gridlock. 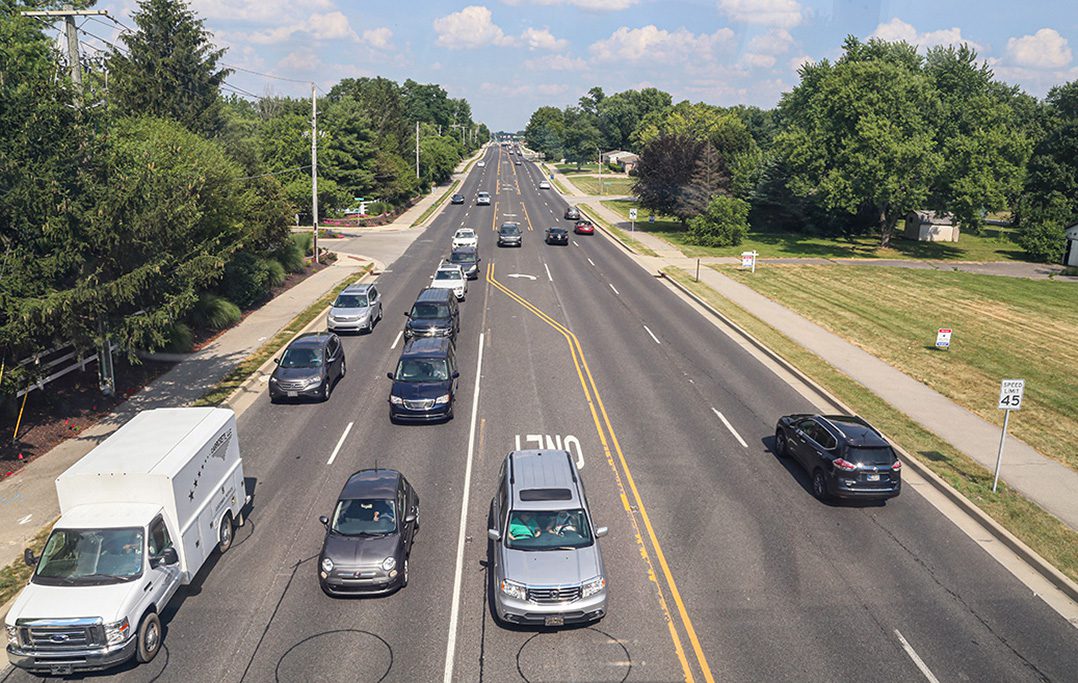 For Carmel City Councilor Sue Finkam, looking for ways to address her constituents’ concerns about 146th Street will be a priority in the next council session if she is re-elected in November.

“My residents are concerned about speeds, although in some cases congestion takes care of that,” Finkam said. “Even when it’s congested, we have people who want to drive excessively fast through that corridor and there’s just so much traffic.”

Finkam’s district includes the majority of a stretch of 146th Street included in a 2018 feasibility study that looked at improving intersections from Lowe’s Way to Hazel Dell Parkway. The study, conducted by CHA Consulting and funded through Hamilton County, concluded that most intersections operated at an acceptable level of service at the time but that all of them will be unacceptable by 2035, with several failing to be acceptable as early as 2020 if improvements aren’t made.

The study recommended teardrop roundabout interchanges, similar to those on Keystone Parkway in Carmel, at all intersections except the Cool Creek Commons entrance, where a two-lane metered roundabout is recommended.

The study also estimated the cost of upgrading each intersection, with the metered roundabout coming in at $5.8 million and the others at approximately $27 million each. Because of the construction costs and need to acquire many parcels of land to build teardrop roundabouts, county officials are not sure what the future will look like at those intersections.

“It’s very difficult when you get someplace like Gray Road or Carey Road because the amount of property we’d need to do those (teardrop roundabouts) is very large,” Davis said. “There’s a lot of businesses already developed right up next to the road, so it’s not known if you could even do them or not.”

Hamilton County Commissioner Mark Heirbrandt said he and other county representatives went to Washington, D.C. after completion of the 2018 feasibility study to meet with elected officials and the Federal Highway Administration to discuss the possibility of using federal funds to help pay for the projects.

“We very rarely come out there asking for funding, but this is such a large project and it’s so important to the county we felt it was important to look for any funding opportunities that were out there,” Heirbrandt said.

To date, funding has not been identified, but county officials plan to continue applying for federal grants.

Heirbrandt said the intersection at Hazel Dell Parkway – which saw accidents increase 65 percent between 2015 and 2018 according to HCSO statistics – is the top priority of all intersections in the study. He also said the county may start preliminary engineering and environmental work there to stay “ahead of the game.”

Elsewhere along 146th Street, the county has major improvement projects under way. Interchanges will be built at Ind. 37 and Allisonville Road, with construction expected to start in early 2020 and late 2022 or early 2023, respectively.

Later this year, the county plans to repave certain segments of the corridor, including the intersection at Hazel Dell Parkway. A larger repaving project, which received federal funding, will upgrade the road from U.S. 31 to Hazel Dell Parkway. The project isn’t expected to begin until late 2023, when federal funds become available.

The county also is planning to look at 146th street at U.S. 31, which uses a system of ramps and signals that many drivers find confusing. Officials want to find ways to help traffic flow more efficiently through the area.

County officials also are planning to use what they’ve learned through the 146th Street project to widen roads that are expected to become major east-west corridors in the future: 236th Street and 276th Street.

When the county first considered widening 146th Street more than 25 years ago, collaboration has been key. With so many municipalities affected, officials say they are still committed to working together to improve the road throughout the county.

“The county and all the cities and towns all get along really well,” Heirbrandt said. “We all realize that we’re stronger as a team rather than just one entity.”

“Sometimes you get out there and it’s not even rush hour and you’re wondering, ‘Where are all these people coming from?’” – Stacey Kiernan, Carmel

“I’m a runner, and when I am on 146th Street to get to the Hagan-Burke Trail, I go fast because I’m afraid someone’s going to jump the highway.” – Deb Leyndyke, Carmel

“146th Street is dangerous, but not from the design. Rather, the attitudes and behaviors of the drivers make it dangerous. People have a blatant disregard for others. They view their time as more important than the safety of others. They jump green lights and run red lights. With the speeds on the street, that is a deadly combination.” – Bill Winn, Carmel