Sophia McCoskey is a natural performer.

“She always does better in front of a crowd,” said her mother, Jill McCoskey. “She enjoys performing in front of people.” 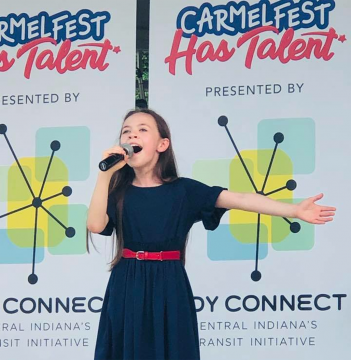 McCoskey, a 10-year-old Noblesville resident, won the 12-and-under age division July 4 in the CarmelFest Has Talent at the Carmel Gazebo stage. She had been selected as a semifinalist and then finished in the top three July 3 in the first day of completion.

“It felt great,” she said of winning.

McCoskey, who finished second in the competition in 2016, said the previous experience helped.

“I was less nervous,” she said.

McCoskey, who is homeschooled and will be a fifth-grader, sang one of her favorite songs, “Don’t Rain on My Parade.”

McCoskey, who performs in musical theater, was in “Shrek The Musical Jr.” in June in a Junior Civic production in Carmel.

Meggie Iyer, who will be a Carmel High School freshman in August, placed second in the 13 to 16 age division. She sang “When We Were Young.”

“Something I really enjoyed about the competition was being able to perform in front of my hometown as they were all so supportive, and it really is uplifting and humbling to perform in front of the crowd you know and love,” Iyer said. “I also loved that I got to meet some talented and incredible people. It was so great to interact with other artists, and it really broadened my sense of community. I would definitely want to do this again because it’s an amazing experience, and I am motivated to do better next time.”

Iyer said she benefited from the experience of performing twice in front of a crowd.

“It was really rewarding to be able to perform in front of them in the first place, but I think it also increased my confidence,” Iyer said. “Seeing people cheer for me was extremely fulfilling. I was both grateful and pleased with getting second place, but I would have been thrilled to have gotten first. This motivates me to do better the next time I do CarmelFest Has Talent.”

In the 17 to 20 age division, Cardinality, led by Andy Reel from Bargersville, was victorious. Kaylee Johnson-Bradley, McCordsville, placed second and Samantha Voegele, Noblesville, was third.