“Adele and I decided we wanted to focus on documentaries,” Stauffer said. “We were trying to find unique people within the community in Carmel and Greater Indianapolis.” 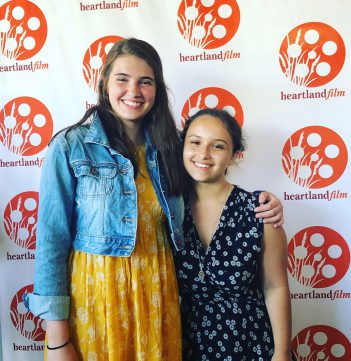 Hope Stauffer, left, and Adele Reich create documentary about No Label at the Table. (Submitted photo)

“INDY-viduals: Rising Above” focuses on No Label at the Table in Carmel, a gluten-free and dairy-free bakery that only employs people on the autism spectrum.

“Rising Above” will be featured in the High School Film Competition in the July 25-28 Indy Shorts Film Festival at Newfields in Indianapolis. This is the second year for Indy Shorts, which is presented by Heartland Film and organizers of the Heartland International Film Festival. This was the second episode. The first was about a Broad Ripple flower shop.

It will be competing for the Summer White Lynch Memorial Award, the $2,000 grand prize for the best high school film.

“We talked with the owner (Shelly Henley) of the bakery and we got a lot of insight on how difficult it is for people with autism to be employed,” Stauffer said. “She opened up the bakery because her son (Jacob) wanted to become a baker and it gave him the opportunity to thrive in that environment along with the other workers there. We felt it was a cool story and a unique story in our community.

“We found it was much more than a bakery. We found these really awesome people that are running this bakery despite their disability. We found deeper personal stories within the bakery itself.”

The 10-minute documentary includes interviews with most of the employees, who were working there at the time it was filmed.

“The whole point was to get what this bakery was about and what it meant to the people from the experiences of the people who worked there,” Reich said. “We got an interview with a customer who came in unexpectedly while we were filming. We tried to be as authentic as possible. We didn’t interfere. It’s not a narrative film. It’s completely documentary-style.”

Reich and Stauffer turned the documentary in to their teacher in December 2018 and submitted the final draft to Indy Shorts in March. They are both enrolled at Ball State. Reich will major in journalism and telecommunications and Stauffer will major in digital video production and German.