Harrison Gapinski Coon has no trouble pinpointing what he likes most about the role of Grimesby Roylott.

“I get to play the villain,” Gapinski Coon said. 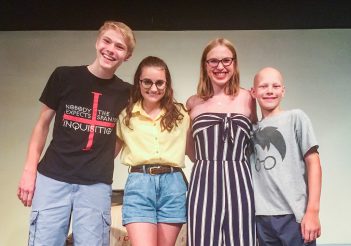 Gapinski Coon, who will be a sixth-grader at Westfield Intermediate in August, portrays Roylott in Encore Rising Star Youth’s production of Sir Arthur Conan Doyle’s “The Adventure of the Speckled Band” at Westfield Playhouse for six performances July 26-28 and Aug. 2-4.

Evan Wolfgang, who will be a Lebanon High School junior, plays Sherlock Holmes.

“I’ve always loved Sherlock Holmes as a character and I saw this was happening,” said Wolfgang, who decided to audition.

The play is directed by Fishers resident Veronique Duprey. Her daughter, Audrey, is playing Dr. Watson.

Emma Fox, who will be a Westfield High School sophomore, is cast as Helen Stoner.

“I thought maybe I’d get a minor role. When I got the call that I got the female lead, I was just in shock,” Fox said. “It was amazing. She’s a very confident character. She’s bold.”

Fox said in past productions she has had very few lines as a background character.

“I’ve spent a lot of my summer inside reading my lines to make sure I have all of it ready for the show,” Fox said. “The British accent is one of the most difficult things because you have to remember to do your lines and do the accent.”

McKenzie Odle, who will be a Noblesville High School senior, plays Mrs. Waverly, the housekeeper.

“This is my first time doing a Westfield show. I’m really excited,” she said.

“I wanted to do this because it’s out of my comfort zone,” Odle said. “I originally wanted to do Emma because she is strong. As I got to know the show better, I was glad I was placed as Mrs. Waverly. It’s a strong female role where she is able to stand up for herself.”