A chance meeting with a visiting entrepreneur from Mali led Bryan Richards on a mission.

Richards, a Carmel resident who teaches design thinking and visual communications at Herron School of Art and Design at IUPUI, is part of a group that welcomes colleagues from Africa. Last summer, the Carmel resident met Boubacar Sy while in a food line.

“He and I found we had shared interests in visual communications and sports,” Richards said. “We talked about what we could do to strengthen his organization. We decided we would develop some programs together. We first unveiled a prototype in October (2018) that we had developed through online correspondence.”

Richards said they learned about a competitive grant from the Mandela Fellowship Program that would allow Americans opportunities to do work in African nations.

The idea was to work with Mali soccer coaches to create positive change. The Goal Keepers initiative links concepts from soccer, design thinking, strategy, management and community engagement and planning.

The $10,000 grant covered the trip and expenses for Richards and Derrin Slack, a Lawrence resident who runs a nonprofit called ProAct Indy, to travel to Bamako, the capital of Mali, June 8 to 15 to supervise the project.

The four components of the initiative are community impact, nonprofit strategy and management, cultural exchange and initiative launch and impact measurement.

“Our audience was a group of nonprofit leaders and soccer coaches,” Richards said. “They in turn are going to teach their communities how to be more observant of the issues and root causes of everything from crime to litter to hygiene problems. They have a lot of problems in everyday life in the streets. We were teaching them a lot of techniques to be able to mobilize communities to improve their neighborhood.”

Richards said they used soccer analogies in their presentations. Participants learned skills in field observation, ethnography, root cause analysis and storyboarding. The skills are expected to enable coaches to define social problems and then produce practical and inspirational solutions. In addition, the coaches learned business skills so they can finance future initiatives.

“We also gave a presentation at the U.S. Embassy for Malians, helping them learn more about American culture, especially in terms of sports,” Richards said. “There are a lot of very positive people who are looking to make good contributions to their communities.”

Richards said before the Mali trip there were travel warnings about terrorists.

“The (U.S.) State Dept. website when you click on Mali said, ‘Do not travel,’” he said. “There was a bomb found a couple of blocks from where we were going to speak on the day we flew there. You go there and you find there is a lot of concern about it, but there is a lot of good being done.”

Slack said he was surprised by the undercurrent of peace in Bamako despite the warnings of violence.

“Most of the community was connected on a deeper level and I appreciated the value they put on relationships,” he said. “Given this high sense of value of people, there was a peaceful atmosphere within the city that made me feel welcomed and safe.”

Richards and Slack shared a room in a heavily secured hotel. 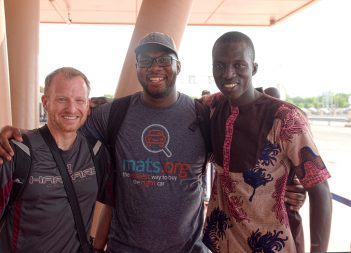 From left, Bryan Richards and Derrin Slack meet Boubacar Sy at the airport in Mali. Richards and Sy first met in 2018 when Sy was visiting the U.S. (Submitted photo)

“I was looking for something more modest, but the U.S. Embassy told us to stay there because they were worried about bomb threats,” Richards said.

During their stay, there was a terrorist attack outside of Bamako that killed 35 people.

Richards said Mali has a lack of rules and regulations. On the plus side, he said that allows change to happen more quickly.

“There is improvisation. You just find solutions,” he said.

Richards said the coaches are now mobilizing their teams and neighbors to tackle issues such as the lack of peaceful parks and sports venues, the prevalence of crime and litter and the need to improve academics and safety in schools.

The workshops culminated in a ceremony in which the leaders swapped Indianapolis Colts and Indy Eleven jerseys with those from the Malian national soccer team. Richards also played soccer with the coaches on the final day.

An online group allows Richards and Slack to keep track of their progress. Both said they were touched by the positivity of the Malians.

“Mali is one of the most destitute countries in the world, and one would think that there would not be much to be hopeful for,” said Slack, whose nonprofit’s mission aims to get at-risk youth involved in public service projects In Indianapolis.  “However, interacting with the community leaders we had the privilege of training in Mali, and seeing the passion and vision for their communities, taught me that even in the toughest of situations, there is hope. That gives me more inspiration to continue my own work in the communities in which I serve, especially the greater Indianapolis area.” 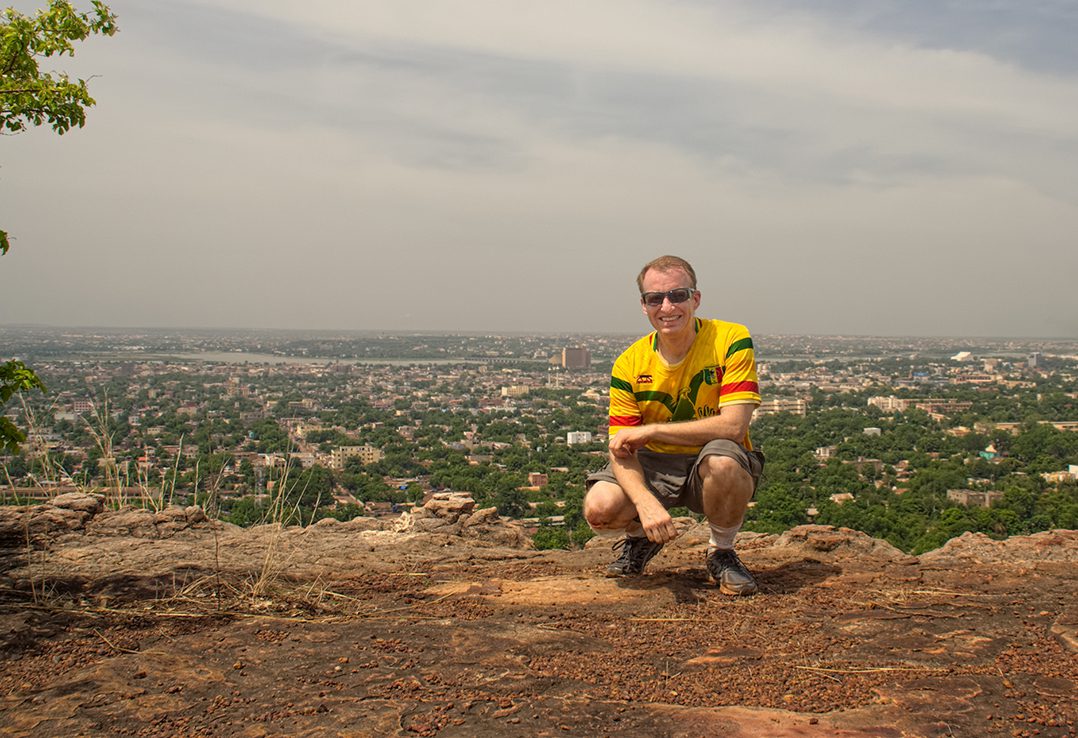 Bryan Richards on a hill in Bamako, Mali. (Submitted photo)

Personal: Richards and his wife, Anna, have lived in Carmel since 2010. Richards’ firm Aspen Impact designs initiatives for companies and provides guidance for executives. Prior to moving to Indianapolis in 2002, Richards lived in Los Angeles and Boston. His parents lived in Indiana before he was born.

Education: Richards has a bachelor of arts degree in economics and business from UCLA, a master’s of business administration from the University of Michigan and master’s degree in education management and social policy from Harvard.