You are at:Home»Current in Westfield»Westfield Community»Westfield residents concerned over proposed development at 146th Street and Oak Ridge Road 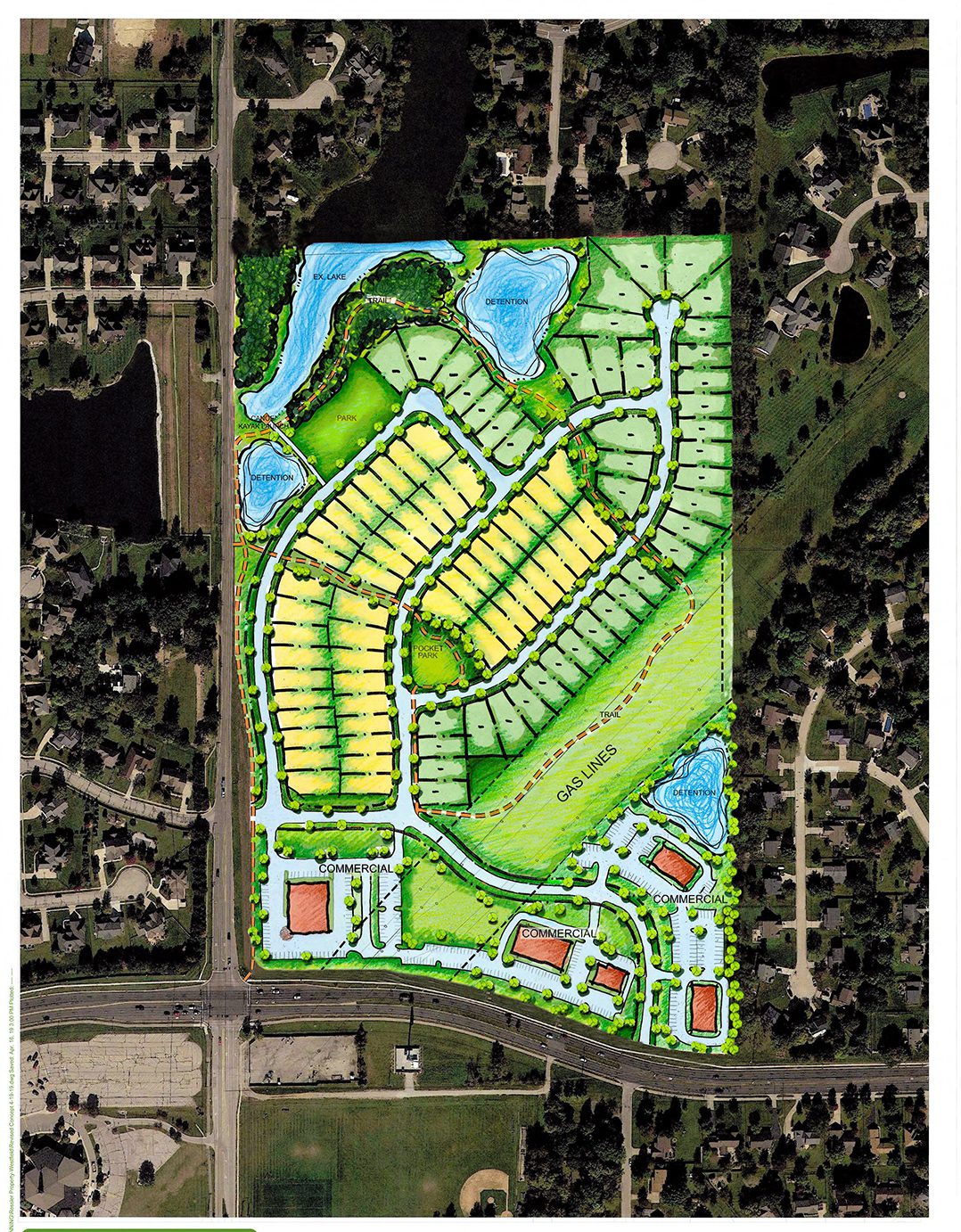 The concept plan for the proposed The Landings at Village Farms development. (Submitted photo)

Chief among their concerns was traffic, too many homes per acre, commercial areas and the sizes of the homes.

When one resident said he would oppose the rezoning proposal at every step, the room erupted in applause.

Pulte and Zuckerman applied for an application for rezoning for The Landings at Village Farms proposal in June. The group then had an introduction in front of the Westfield City Council and took input and then set the meeting inviting neighbors within a certain area. The planning commission’s public meeting is Aug. 5.

The commercial recommendation portion is being proposed along 146th Street.

The proposal covers 58 acres bordered on the south by 146th Street and the west by Oak Ridge Road. Dobosiewicz said there is a residential area of 41 acres, where there is a proposed total of 94 homes, an average of 2.3 homes per acre, two ponds and two parks.

“We’ve tried to limit the use of cul-de-sacs, one of the aims of the planning commission is to have loops and not terminating roads,” he said.

The neighborhood commercial buildings would be of residential character, similar to the Harmony development

Dobosiewicz said the homes are similar to Hunters Run, a Pulte Homes neighborhood in Fishers.

The average home price would between $325,000 and $350,000. In response to criticism that these homes would drive down property rates, Dobosiewicz said a home in that price range is a quality home.

“I don’t think there is a place in Westfield that wouldn’t feel comfortable having homes of this character, quality and value in the midst of other neighborhood,” he said. “I live in Westfield and there are neighborhoods across our city that have values between $100,00 and $600,000 and we are right in the middle.”

Dobosiewicz said there is nothing in the planning paradigm saying if the value of homes are $500,000, then the neighborhood next to it has to be $500,000.

The uses permitted in the commercial area for the development would be for local business, day care, smaller retail uses that are 8,000 square feet or smaller or 12,000 square feet, which could include a pharmacy.

General business such as fast food restaurants, gas stations, veterinary hospitals and kennels are permitted in the area.

Village Farms resident Kate Snedeker said she stood at the corner of 146th Street and the property site, took out her phone and found, within a two-mile radius, there are six pharmacies. Snedeker asked if there could be an exemption for pharmacies so it could be excluded and Dobosiewicz said yes.

“We’re not in a desert of pharmacies,” Snedeker said.

Several residents expressed there wasn’t a need for any amenities because they exist nearby and would prefer the commercial space be eliminated in exchange for larger lot sizes.

“The commercial isn’t as much of a concern because I’m not sure who wants to live on 146th Street as a residential,” Patterson said. “I realize the area is going to be developed, but the density, the drainage issue with the retention ponds into our existing lake. Our existing lake already overflows.”