You are at:Home»Current in Carmel»Carmel Cover Stories»Carmel’s Holle inspired by national media conference

For Gage Holle, the best part of the Washington Journalism and Media Conference was easy to pinpoint.

It was: “The speakers elaborating on their different career paths and life stories,” Holle said. 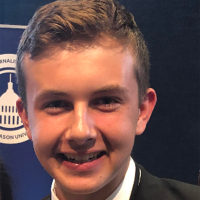 Holle, a Carmel resident who will be a Park Tudor School senior in August, was selected as a National Youth Correspondent for the conference held July 7 to 12 at George Mason University in Fairfax, Va.

Students were chosen based on academic accomplishments and a demonstrated interest and excellence in journalism and media studies.

“Guzy was very passionate and had an interesting story about her life journey,” Holle said. “She had some incredible photos that she showed us. Two of them were Pulitzer Prize-winning ones. Goldberg expanded about her work on environmental issues. Many were issues that I care about and she brought these topics to light.”

Holle said he learned there are several different career paths in journalism, many of which he hadn’t explored.

“At this point, I am considering screenwriting, which allows me to be more creative,” he said.

When he arrived, Holle didn’t know anyone else at the conference.

“I made some friends who I will continue to keep in touch with,” he said. “I also had conversations with some journalists who I would feel confident to connect with in the future.”

The purpose of the week-long program is to encourage and inspire young leaders from around the U.S. who might be seeking a career in media.