“I was usually quiet on the court and I never really talked,” Carroll said. “As a middle (hitter), you’re supposed to call what you are going to hit. My coach Jessica (Lucas) told me to speak up. If I didn’t, I had to do push-ups or run, so I had to work on that.” 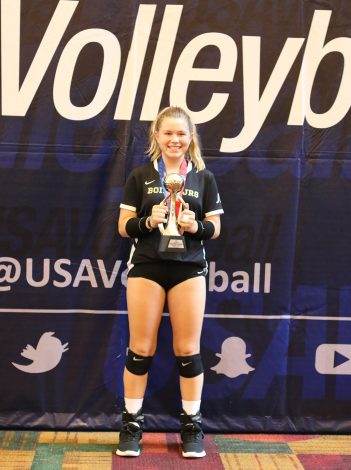 Carroll, a Carmel resident, was a key contributor for the Boilers Juniors Elite Gold team, which finished second in the 12-and-under division at the USA Girls National Volleyball Tournament in Indianapolis. The Boilers Juniors lost to SG Elite 12 from Los Angeles July 2 in the championship at the Indiana Convention Center.

“It was probably one of our worst games,” Carroll said of the final.

Still, she was proud of what the team accomplished.

“We took some time off the court and we got to know each other really well,” Carroll said. “That affected our play. We got along really well.”

Carroll was the only player from Hamilton County on the team. Her coach, Lucas, was a setter from Western Kentucky University and served as a graduate manager for Purdue in 2018.

Carroll, a Creekside Middle School seventh-grader, began playing for Boilers Juniors this past winter. Carroll, who previously played for a Grand Park team, had to travel to practice with the team in Lafayette three times a week.

The 5-foot-7 Carroll plans to play for the Creekside team this fall, then play for the Boilers Juniors 13-and-under team during club season.

Her main goal for the next year is to improve her passing.

Carroll has been playing volleyball for four years. Her older sister, Ally, plays volleyball at Grand Park and will be a freshman at Carmel High School.

“She got me interested in the sport,” said Carroll, who competed in swimming and soccer before deciding to concentrate on volleyball.