You are at:Home»Current in Fishers»Fishers Community»14-year-old competes in national weightlifting competition

Physical fitness is a way of life for 14-year-old Jaycee Mann. She started weightlifting five years ago after watching her father Brandon Mann train.

“My dad became a coach for a gym and I saw him training with his client,” Jaycee said. “So, I told him that I wanted to try it out and I fell in love with it. I’ve been doing it ever since.” 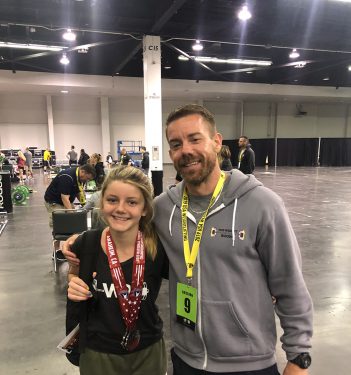 Jaycee won two silver medals at the 2019 Youth National Championships for USA Weightlifting June 28-30 in Anaheim, Calif. During her training, she suffered from appendicitis.

“About six weeks before the competition started, we discovered her appendix had ruptured,” Brandon said. “They had to perform surgery and we stayed in the hospital for a week before getting released. It was a little bit of a slow road to get back up and moving again, but she ended up making a full recovery by the time we made it to the competition.”

Jaycee competed against 12 other teens, performing two weightlifting moves – the snatch and the clean-and-jerk.

Despite winning two silver medals, Jaycee was unsatisfied with her finish. She lifted 143 pounds for the clean-and-jerk and 112 pounds for the snatch. She is confident she could have performed better.

Jaycee wants to continue training at her dad’s gym, The Weight Room, in Fishers and return to the competition next year.

“I’m a competitive person and I can just put that competitiveness in weightlifting,” Jaycee said. “I have a lot of fun with it.”