You are at:Home»Current in Carmel»Carmel Community»Indiana commission prepares to commemorate women’s suffrage centennial

CEO of Girl Scouts of Central Indiana Danielle Shockey has been appointed by Gov. Eric Holcomb to a two-year term on the  new Women’s Suffrage Centennial Commission. Chaired by Lt. Gov. Suzanne Crouch, the 17-member commission has seven spots designated for members who represent an organization whose mission involves education, culture, women’s history or civic engagement. 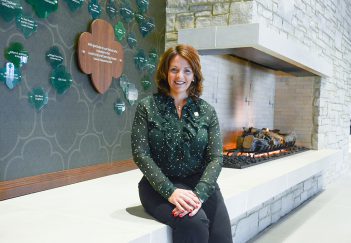 “I am honored to be a part of this commission and to be involved in planning for opportunities to commemorate the passage of the 19th Amendment to the Constitution of the United States,” Shockey said. “I am particularly excited to think about how the commission may be able to encourage and assist state agencies, local government and other organizations to get involved.”

Shockey, a Carmel resident, plans to bring ideas from her experience as an educator of 20 years and her role with Girl Scouts to the planning table.

“I anticipate that while we are going to be thinking about how to impact all Hoosiers, I do feel helping our youth understand the significance of the 19th Amendment will be one of my primary areas of focus,” she said. “If this commission can make it more simplistic for educators, families, communities and Hoosiers to learn more about the suffrage movement and this important milestone, then I think that will make the effort a success.”

She also hopes her role with the Women’s Suffrage Centennial Commission will set an example for young women in the Girl Scouts program.

“The Mission of Girl Scouts is to ‘build girls of courage, confidence and character, who make the world a better place,’ and when Girl Scouting was founded in 1912, women in the United States did not even have the right to vote,” Shockey said. “Many of the early Girl Scout leaders were active in the suffrage movement, including Mary Rafter, leader of the first troop established in Washington, D.C., in December 1913. Since that time, civic engagement and taking action has continued to be a core value in our Girl Scout organization.”

Shockey said 72 percent of current female U.S. Senators, more than half of the 106 women currently in the House of Representatives and all female U.S. Secretaries of State in U.S. history are Girl Scout alumnae.

“This commemoration, and perhaps more importantly multifaceted education, of such significant moments in history that benefited women, including the inequities that existed at the passage of the 19th Amendment, are important lessons not only for our Girl Scouts to learn, but all Americans,” she said. “I am proud to be on a commission that will bring emphasis to this and work to create a legacy that elevates the contributions of Hoosier women and men who were instrumental in the process of ratifying the 19th Amendment.”