For Brett Butler, creating the perfect cocktail is a matter of mixing art and science.

“It’s really finding that balance between art and science, the science of liquid and making a drink look the way it does with garnishes,” he said. “Eighty to 85 percent of our taste is smell, but it’s also visual.” 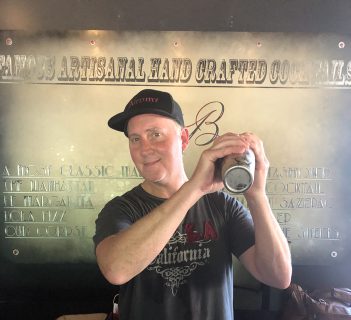 Brett Butler specializes in farm-to-glass cocktails. He tries to use fresh, local ingredients in his beverage creations. (Photos by Anna Skinner)

Butler, Carmel, is the founder of Alcomy, a mobile cocktail business. He also bartends at Danny Boy Beer Works in Carmel.

“It’s more than mixology,” Butler said. “There’s a lot of entertainment and flair and it’s an overall experience, hopefully, people haven’t had before.”

Butler founded Alcomy in 2016 when he lived in Los Angeles. The business began to pick up steam when he moved to Indiana in September 2017.

Butler originally moved LA for acting and writing in 2006. He was hired for work as an extra in short films and acted in some commercials.

“I came back to spend time with my family and get back to my roots and lay down my roots and also continue this business,” Butler said. “In LA, there’s a lot of competition and a lot of people doing what I do.”

While in LA, Butler studied under mixologist Matthew Biancaniello, a cocktail chef who takes groups foraging in the Santa Monica mountains. Biancaniello is the reason behind Butler’s fascination with the farm-to-glass cocktail trend.

“The concept I came up with is to make it more health-conscious, using fresh herbs, fresh juices and going to farmers markets,” Butler said. “I like to use things from farmers markets and really celebrate the farmers of Indiana.”

Butler sometimes dehydrates fruit for garnishes. He also frequently creates his own homemade syrups, such as a blueberry-lavender-sage.

Butler works private events and teaches classes through Alcomy. He began working for Danny Boy Beer Works in October 2017 and recently created a pop-up bar concept, where every third Thursday of each month he organizes a craft cocktail bar with five specialty drinks. Diners order drinks from their server or bartender and Butler makes it.

Butler’s goal is to be the go-to mobile mixology service in Indiana. He also is working on creating handcrafted mixers called Alcomy Elixirs. Eventually, he wants to create a partnership with a company and sell canned cocktails.

“Alcomy is curating an elevated liquid experience. That’s my focus, to be really unique in that,” Butler said. “There’s no theme, no idea, no event I’m not willing to try. There’s nothing beyond the realm of creating in regard to putting together an experience.”

For more or to keep up with special classes and events, visit Alcomy on Facebook. Book an event by emailing Butler at brettwbutler@gmail.com.

Best tip for a beginning bartender: Add the alcohol last. “Always add the least expensive ingredients first, so if you screw up the drink as you’re learning, you’re not going to waste good alcohol.”

Most important bar tool: A jigger. “It’s your best friend, making sure everything is all portioned. It’s all math.”

Ingredient to always have on hand: Some kind of citrus. “Whether it’s orange juice, a good, fresh-squeezed lime or lemon juice, it goes a long way.”

Favorite drink to enjoy: An old-fashioned.

Favorite drink to make: Feng shui. “It’s so easy to get wrong, but if I can balance it, it’s lychee, Thai basil, Thai chilis, lemongrass-honey-basil syrup with vodka and sake.”