Gabriel Lehman is taking a break from his hectic painting schedule for an annual important date.

Lehman is a longtime featured artist at the Carmel International Arts Festival, which is set for Sept. 28-29.

“It’s always a good show for us and we enjoy our local clients,” Lehman said. “We get a lot of repeat customers. It’s always been very beneficial. I can’t imagine going a year without doing this show.” 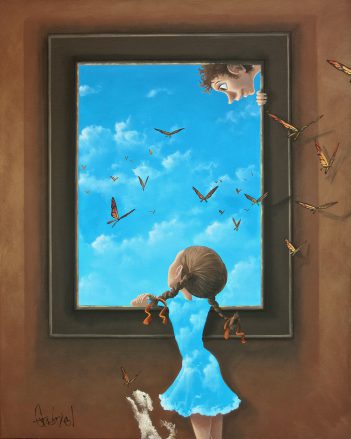 Lehman will have 30 square feet of wall space in his light-domed tent.

“Having the right tent has always been very important for us,” Lehman said. “Making sure, rain or shine, we are always going to be in business.”

Lehman said he brings anywhere from 20 to 35 pieces, depending on their size.

“I do illustrated surrealism,” Lehman said. “A lot of people say it looks like it walked out of a movie. It’s very character heavy. These are humanoid characters I’ve created. There is not a lot of earth involved in my pieces. It’s predominantly clouds.”

Lehman, who had previously lived in Noblesville for several years, works from his home studio in Nineveh.

Lehman, 42, and his wife, Jamie, self-published a book, “Splat/Kitty Calamity.” Jamie did the writing and Lehman did the illustrating. Shelby County Reads awarded it Book of the Year.

“We toured all the elementary schools and had a lot of fun doing it,” Lehman said. “It’s very slapstick and fun. My wife is a poet and she does sing-song rhymes. She does so many short poems that aren’t big enough to make into a book.”

The couple is now working on a textbook-size art book called “Paper Airplanes.” Each page has a poem.

Lehman bought 75 16-inch by 20-inch canvases for the book’s artwork.

“I have one continuous sky for the entire book,” Lehman said. “I’m shutting down all commissions and I’m just working on the book. Each piece is a real-deal painting, which can stand alone and sell as a painting instead of an illustration.”

The book’s release is tentatively set for June 2020. The launch will be on the third-floor gallery at Saks Fifth Avenue at The Fashion Mall at Keystone in Indianapolis.