The Noblesville Common Council conducted a regular meeting Aug. 12. All councilors were present. The next common council meeting will be at 7 p.m. Aug. 27 at City Hall, 16 S. 10th St., on the second floor in the council chambers. For more, visit cityofnoblesville.org/council. 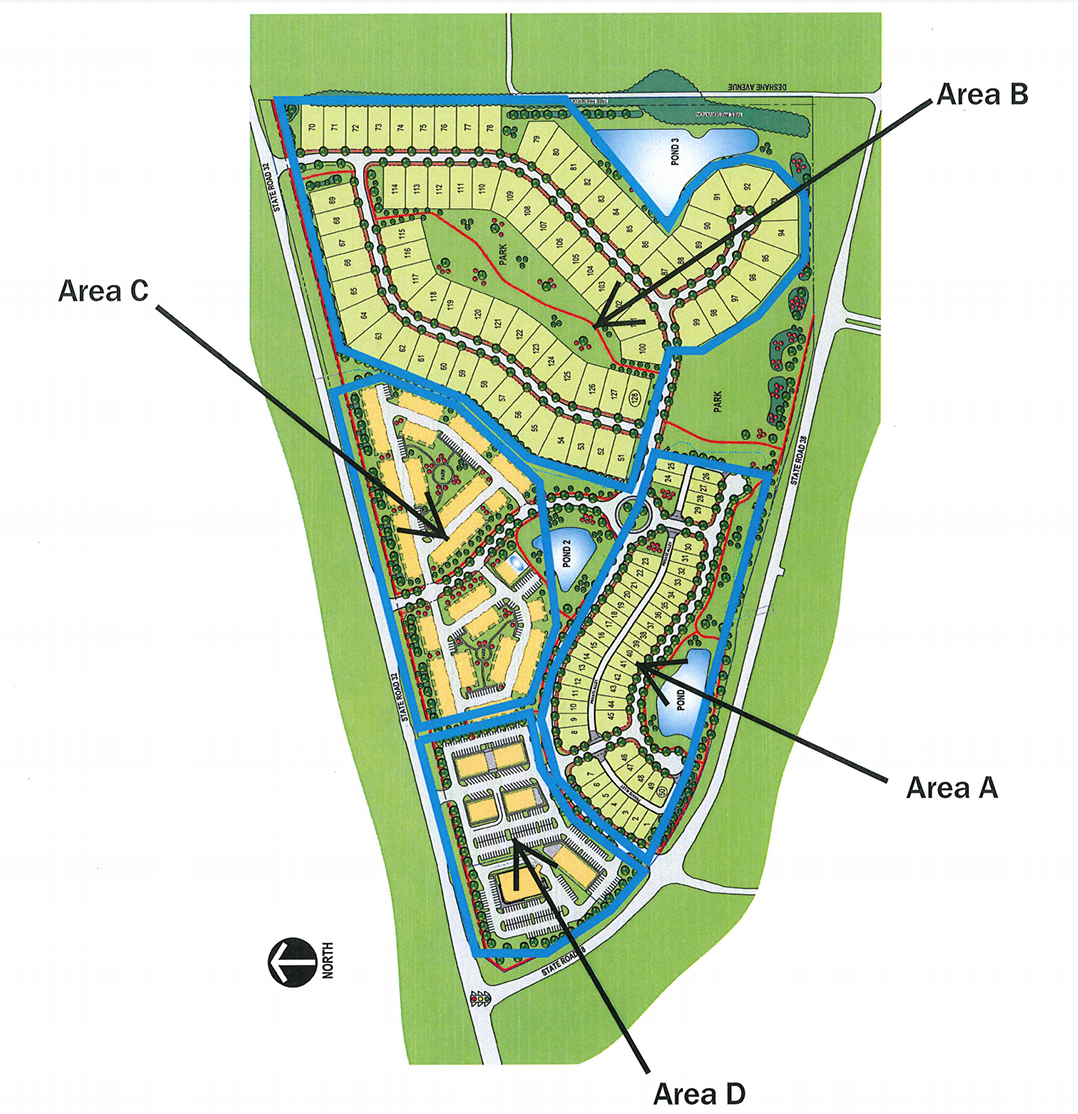 The Crossroads development will be at the eastern split of Ind. 32 and 38 and will bring multi-family housing and commercial buildings. (Submitted map)

What happened: The council unanimously approved an amendment to the Crossroads housing and commercial development project.

What it means: In 2017, the council approved a development plan for Crossroads, a housing and commercial project at the eastern split of Ind. 32 and 38, just east of Union Chapel Road. Boomerang Venture Partners, LLC, is developing the project.

The amendment also proposes that the number of retention ponds be reduced from four to three, allowing for an additional park for residents; relocating the roundabout in the project to avoid costs associated with re-routing stormwater piping; and adding 13 lots and changing the original 75-foot lots to 70-foot lots.

In May, the amendment was presented to the council as an introduction before it went to the Noblesville Plan Commission, which unanimously voted to send the petition back to the common council with a favorable recommendation at its June 17 meeting.

What happened: The council unanimously approved and held a public hearing for an appropriation from the general fund for a public purpose grant for the reconstruction of the Logan Street Bridge.

What it means: The ordinance is the final approval of a memorandum of understanding between the City of Noblesville and Hamilton County for the construction of the Logan Street Pedestrian Bridge.

What happened: Councilors discussed and held a public hearing for an ordinance for additional appropriations from the parking meter fund to replace and upgrade existing parking meter equipment.

What it means: The ordinance appropriates money for the installation of new parking meter kiosks that accept coins, credit cards and payment through a smartphone app to replace existing coin-fed parking meters. No citizens spoke during the public hearing. As the ordinance was introduced for a first reading, no official vote was taken, and the council will vote on the appropriation at its next meeting.

What happened: The council considered an appropriation transfer in the parking meter fund to purchase new support posts for new signage in certain city-owned parking lots.

What it means: City Controller Jeff Spalding said the $4,700 transfer is related to the change of parking meter equipment. The new equipment requires new signage in the area, which the street department is handling. However, posts for those signs are needed.

The council unanimously approved the transfer.

What happened: The council heard an introduction and approved a change to the 2019 salary ordinance for city employees and appointed officials from Human Resources Director Holly Ramon.

What it means: Ramon introduced the ordinance to allow for two changes, which include the addition of a new position, an administrative court clerk, and a pay raise for the position of budget/financial analyst in the office of finance and accounting.

“The timing of this request is due to the turnover of the court administrator and our newly hired court administrator and the upcoming and possible retirement of another court employee,” Ramon said in reference to the administrative court clerk position. “(The second) is a request to increase the biweekly compensation for the budget/financial analyst position. This is currently a vacant position. However, we are in the final interview stages and hope to have a candidate hired very soon.”

The council voted to suspend the rules to take a vote on the request after first reading and unanimously approved the ordinance.

What happened: The council considered an appropriation transfer in the general fund to fund an additional staff position for City Court.

What it means: The transfer is related to the previous item, a change in the salary ordinance allowing for a new position, an administrative court clerk.

“The actual transfer is coming from the personal services budget of the police department to the court because the police department has some savings from vacancy and turnover, and they have a large personal services budget, so they’ll have available (funds) that can be transferred to cover this,” said Jeff Spalding, the city’s financial controller. “The court budget is very small, so they didn’t have excess funding to be able to cover the added staff position for the remainder of the year, but this should address that problem.”

The council unanimously approved the transfer.

What happened: The council unanimously approved a resolution for an economic development agreement with Boomerang Development.

What it means: The resolution allows for the issuance of approximately $6.3 million in bonds for a mixed-use project along Ind. 32/38 east of Presley Drive, to be known as the Noblesville Northeast Business Park and Crossroads. The development will have senior and multi-family housing, an industrial park and commercial space.