You are at:Home»Current in Westfield»Westfield Community»Moon landing anniversary puts McCauley in high demand

With the 50th anniversary celebration of the Apollo 11 moon landing July 20, Greg McCauley has been in hot demand this summer.

McCauley, a Westfield resident, is the executive director and CEO of the Link Observatory Space Science Institute. He gave a presentation Aug. 15 to a combined group of the Chamber of Commerce of Westfield and Zionsville at the Indianapolis Executive Airport in Zionsville. 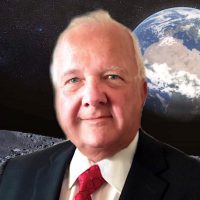 McCauley said more people watched the moon landing on TV or listened to it on radio than any other event in history.

In the early 1970s, McCauley worked as a NASA contractor at the Manned Spacecraft Center (now Johnson Space Center) in Houston in the Mission Planning and Analysis Division. He was actively involved in the lunar missions of Apollo 15 and 16 and was a member of the Lunar Launch Team for Apollo 17

McCauley noted why it took 20 minutes for Buzz Aldrin to become the second man to step on the moon after Neil Armstrong became the first man.

“Buzz was in the cockpit of the lunar module ready to come down for the mission,” McCauley said. “The first thing Armstrong was to do was pick up lunar regolith, which is dirt, and rocks and stuff them in thigh pockets of his space suit, so if anything would happen, they could get out of dodge and at least bring something home with them.”

McCauley said no one had knowledge about the surface of the moon.

“There were scientists that thought that the lunar module after landing would just sink into the dust of the surface of the moon,” he said. “They thought there were crevices like on the South Pole that are covered with snow. They thought the moon might be covered with things like that and as the astronauts walked around, they could fall into this quicksand of lunar regolith.”

McCauley said procedure called for Armstrong to fill his pockets and walk around the lunar module.

“Then 20 minutes later if Neil is still alive, then Buzz would come out,” McCauley said. “This is dangerous business. Buzz had his hands on the controls. They are ready to get out of there. Let’s send the guinea pig out. I’m serious.”

Mike Collins, the third man on the mission, was orbiting the moon the entire time.

“He was the command module pilot. He was making 22 laps around the moon during the process,” McCauley said. “Mike had trained for months to fly the command module from the moon to the Earth, re-enter and splash down alone. All the systems were made to be used by one man. If the other two guys were there, that was a real plus. This is dangerous stuff. Who signs up for stuff like that?”

Before they left, all three astronauts signed 300 postcards emblazoned with their pictures.

“They gave 100 of those postcards to each of the wives of the three astronauts,” McCauley said. “The day they landed on the moon, a friend of the family would have those postmarked at the office in Houston and bring back and give them to the wives. The reason is, if they didn’t make it back from the moon, those postcards would have some material value. The wives could auction those off for money to help support the family. The insurance offered to NASA employees did not cover astronauts in flight. It was called risky and experimental, and the life insurance policy was canceled during the flight. That’s a true story. They changed it after the end of the Apollo program.”