Opera in the Park is back and so is Angela Brown.

Brown appeared at the last Opera in the Park concert in 1997. 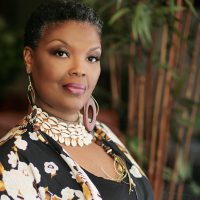 The Indianapolis Opera will present the revised Opera in the Park performance at 6 p.m. Sept. 8 at Garfield Park’s MacAllister Amphitheater in Indianapolis. Brown and Daniel Narducci are guest soloists and it will be conducted by the Opera’s new artistic advisor, Alfred Savia. It will be presented in concert format with full orchestra and lively narration.

Opera in the Park is an official production of the nonprofit Friends of Garfield Park in partnership with the Indianapolis Parks Dept. Admission is free.

“This is going to be a relaxed setting where the kids can come,” Brown said. “You can bring food and your family. You can have a light, enjoyable evening with opera. It’s not such a stuffy experience but one that everyone can enjoy and feel like they can be part of.”

Brown, a soprano from Indianapolis, will perform three numbers, “Vissi d’arte” from “Tosca” by Giacomo Puccini with Narducci, “Summertime” from “Porgy and Bess” by George Gershwin and “Brindisi” (“Libiamo, ne’ liter calici”) from “La Traviata” by Giuseppe Verdi.

Brown primarily performs across the U.S. and Europe.

“Lately, I’ve done more solo work with symphony orchestras and my show ‘Opera…From a Sistah’s Point of View,’” Brown said. “That’s my show I take around to schools and performing arts organizations. It demystifies opera. I do that through my foundation, Morning Brown.”

“I always say opera chose me, I didn’t choose it,” she said. “Once I went to school and learned to sing opera, I took to the technique like a duck to water. It was something that did fit my vocal ability. I had done a lot of musical theater in Indianapolis, mostly with the Civic Theatre. (Opera) encompasses everything I do from the acting, the singing, the movement.

“I consider myself pretty funny sometimes, and then the drama of it all. Opera fits all those.”

Brown graduated from Crispus Attucks High School, which was then a medical magnet school

“I thought I wanted to go into the medical field, but I ended up going toward the arts,” she said.

Brown attended Oakwood University in Huntsville, Ala., and then studied at Indiana University

“I’m going to be making my debut with Seattle Opera and New Orleans Opera doing “Charlie Parker’s Yardbird,” and the role I play is the mother, so I’m excited about that,” she said.

The program will include excerpts from the Indianapolis Opera’s 2019-20 productions of “Elixir of Love” and “Don Giovanni,” as well as other familiar chorus tunes and solos.

“Elixir of Love” will be presented Nov. 15 to 17 at The Tarkington at the Center for the Performing Arts in Carmel. Wolfgang Amadeus Mozart’s “Don Giovanni” is set for March 20 to 22, 2020 at The Toby Theater at Newfields in Indianapolis. The third performance will be “Brundibar” and “Vedem” at The Toby April 24 to 26, 2020.

The park concert will conclude with a champagne toast (sparkling cider) celebrating the opening of the 45th anniversary season.

Beginning at 5 p.m., food from Prime 47 Indy’s Steakhouse will be available for purchase, or patrons can bring a picnic dinner.

For more on Brown, visit angelambrown.com. For more on Indianapolis Opera, visit indyopera.org.