For 28 years, Zionsville has presented a weekly summer concert series at Lincoln Park.

That reign has ended as the Zionsville Cultural District recently announced the series will move to Lions Park in the summer of 2020. However, the ZCD plans to present periodic concerts at Lincoln Park. 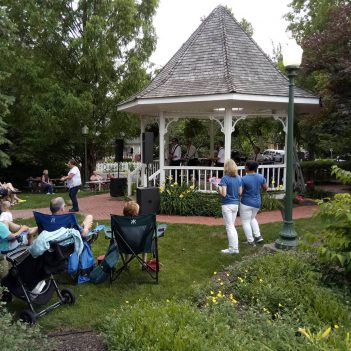 ZCD assumed operation of the Lincoln Park Concert Series six years ago from the Chamber of Commerce.

“We found the acoustics were not that good and the gazebo was too small,” Zionsville Cultural District President Carla Howie said. “The park doesn’t have playground equipment, so we brought in Mr. Daniel, who did a wonderful job for the first half-hour.”

However, after the children’s show, some children climbed trees.

“It was a concert for the Zionsville Cultural District because we didn’t want anyone to get hurt,” Howie said.

Howie said the ZCD also wanted more space for its sponsors and was concerned about lack of restroom facilities.

“If we wanted to do something larger, Lincoln Park wasn’t able to accommodate that,” Howie said. “Lions Park seemed welcoming. They have a bigger gazebo and a concession stand they would offer during the season. We’re looking to make the series more robust.”

There are more restrooms and a playground.

“We have a lot of space for the crowd like Conner Prairie,” Howie said.

The Zionsville Cultural District decided to do produce a 266-square-foot mural of Abraham Lincoln across the park.

“We thought, what a wonderful way to honor Lincoln Park by a mural of Abraham Lincoln,” Howie said. “What we’re hoping to do is program expansion and do a smaller concert, maybe not every week but several times during the summer.”

Howie said that would be in addition to the concert series at Lions Park.

“We know we have a dedicated crowd that enjoys coming to Lincoln Park,” Howie said. “Lincoln Park doesn’t allow us to grow and we want to continue the legacy at Lincoln Park.”

Howie said a solo performer, a duet or quartet might prefer to perform at a smaller venue like Lincoln Park.”