“One of the best parts of this job is the number of the hats that you do have to wear because of the different type of customers and opportunities to create lively events around the Speedway,” Boles said. “So, I’m involved in the band decisions, how do you price things out, how do you build stages, where do you build stages. What kind of races do you want and the schedule.” 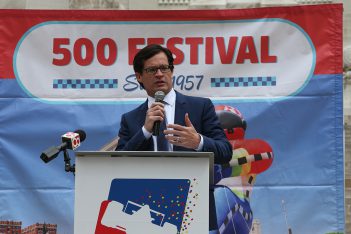 At the moment, the Zionsville resident is immersed in preparing events surrounding the Big Machine Vodka 400 at the Brickyard Sept. 8. The Monster Energy NASCAR Cup race culminates five days of events.

“What I’m excited about is having a first and final September weekend without rain, since it rained the three days last year,” Boles said.

Florida Georgia Line’s concert performance was canceled because of rain last year. The Big Machine Vodka 400 race was postponed a day because of rain.

“This is the 26th running (of the NASCAR Cup race) and it will be the first time we have more than the race that day,” Boles said. “We’re going to have qualifying for the Big Machine Vodka the same day, so that will be kind of fun.”

It’s the last race of the NASCAR regular season and a final chance for drivers to make the Monster Energy NASCAR Cup Series Playoff.

The NASCAR race moves to July 4 weekend in 2020 with NASCAR officials preferring to put Daytona as the final race before the Playoff.

“We own the Memorial Day weekend with the 500, so we thought why not do July 4?” Boles said. “Take the two biggest patriotic weekends and celebrate at the Speedway.”

“Music has been an important part of the (Indianapolis) 500 since Carb Day was in its infancy in the ’70s and ’80s,” Boles said. “The Big Machine Vodka folks said, ‘Let’s try music around the Brickyard.’ We had music fest two years ago on Friday and Saturday night, and then we consolidated into one night and that was rained out. Tickets sales for the music event are strong, so I’m looking forward to a pretty successful event.”

Practice for the NASCAR Cup cars and the Xfinity Series Indiana 250 race will be Sept. 7.

“There is five days of track activity,” Boles said. “It’s pretty jam-packed for us.”

The Driven2SaveLives BC39 Powered by NOS Energy Drink, the dirt track race on the quarter-mile clay inside Turn 3 for midget cars, is set for Sept. 5. There will be hot laps and heat races Sept. 4. The race honors late USAC National Midget Series champion and three-time Indianapolis 500 starter Bryan Clauson, a Noblesville High School graduate who died in a 2016 racing accident. He was a registered tissue and organ donor who saved five lives with his organ donations.