Giving up the title won’t be easy. 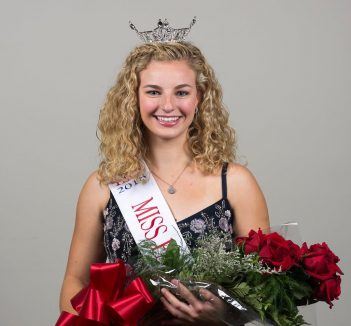 “If it was possible, I would redo this year in a heartbeat because of everything I have gained out of my year of service, such as confidence, perseverance, scholarship money, performing opportunities, connections and friends,” Broadwater said. “I am constantly talking about the benefits of the Miss America program and how it truly has helped mold me into the young woman I aspire to be.”

Broadwater will take part in the parade at 10, a.m. Sept. 7 and then help crown the new Miss Fall Festival Outstanding Teen Sept. 14. The pageant, for Boone County residents ages 13 to 17, begins at 3 p.m. at Zionsville United Methodist Church. Broadwater also will sing the national anthem during the opening ceremony.

“Especially being from Zionsville, having the opportunity to serve as Miss Fall Festival’s Outstanding Teen has been such a heartwarming, humbling experience,” she said. “The amount of support the community has given me throughout this year has been mind-boggling. I can’t tell you how many times people have stopped me and asked if I was ‘the girl wearing a crown in the newspaper.’ It puts the biggest smile on my face when people say things like this, and gives me the perfect opportunity to share more about my platform and this program with them.”

Broadwater said the best part of the year of service was the impact she made with her platform, “Singing for Smiles.”

“I used my passion for music and for finding a cure for Alzheimer’s to make a difference in the lives of those with the disease, and tried to put smiles on as many faces as possible,” she said. “This title has aided me in obtaining so many opportunities such as singing at nursing homes, singing the national anthem at the Walk to End Alzheimer’s walk in downtown Indy and getting to compete at Miss Indiana’s Outstanding Teen pageant.”

Broadwater said she absolutely recommends it to other teens.

Broadwater said so many girls think they are not the pageant type and that holds them back from participating. She was reluctant at first, too.

“Your year of service is so individualized because it is your platform, your talent, your responses, simply it is you,” she said. “I would recommend this organization to anyone who is looking for an opportunity to make a difference in the world, a way to make scholarship money, to make new friends, to perform a talent and simply to have a chance to be you. If you just be yourself, you will always come out a winner, crown or not.”

Louanne Giralte, in her eighth year of directing the competition, said those interested should request an application by Sept. 1 with a Sept. 4 submission deadline.

“The average is between six and eight contestants,” Giralte said. “Just the interview experience is worth its weight in gold.”

For the application,  email missfallfestival@gmail.com. There is no entry fee.

Admission to the pageant is free.