Wyatt Davis proved he has a flair for the dramatic.

The Carmel High School senior swimmer came from fourth place with a lap to go to win gold in the 200-meter backstroke at the Aug. 25 World Junior Championships 25 in Budapest, Hungary. 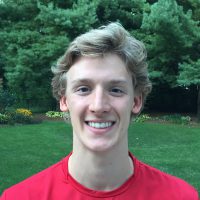 “The 200 back has always been one of my favorite events, and being able to trust my training and my race strategy to be the first to touch the wall for Team USA was a very special moment for me,” Davis said.

“As long as you have a lane, you have a chance to win, or at least move up in places,” Davis said. “So to me, it didn’t really matter all that much what I was seeded. I just knew that if I had a lane, I had an opportunity to do something great.”

The win gave Davis six medals for the World Juniors, which ran Aug. 20 to 25.

“To be honest, I was not expecting to get a medal at all,” Davis said. “I was going into the meet hoping for a few new best times and to enjoy the experience. Never would I have thought the week leading up to the meet that I would have walked away with six. I just learned to attack every race with the utmost confidence and to trust the process that got me there.”

Davis picked up a gold in the 400-meter mixed medley relay. He also earned a gold medal for being in the prelims for the 800-meter relay team. He earned silver in the 50 backstroke and 400 medley relay and a bronze in the 100 backstroke. 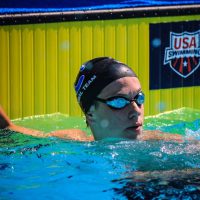 CHS teammate Jake Mitchell was on the U.S.’s winning 800-meter relay team, which set a world junior record. He gave the Americans the lead in the third leg. He was fourth in the 400 meters and seventh in the 800.

Davis and Mitchell have committed to swim next year for the University of Michigan.

Davis said being part of Team USA was special.

“The friendships that I made during that trip, not only with the other swimmers but also with the coaches and support staff, will always be with me,” Davis said. “Sharing this experience with Team USA was so special to me and was by far the best part of the trip.”

Mitchell said cheering on his teammates from the stands was the best part.

“Being with those with the same goals was absolutely incredible,” Mitchell said. “To cheer for the United States was the most exciting experience I ever had. Being able to see Wyatt and what he accomplished was unreal. He trains so hard every single day.”