Dr. James Haines will get a different view of the Fall Festival parade this year.

“Growing up in Zionsville, I’ve been attending the parade since the 1960s when I was a kid,” the 1972 Zionsville Community High School graduate said. “One year I even marched in it when I was a member of Zionsville Marching Band. I was a very untalented drummer in the band for a while.” 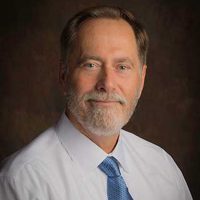 Haines, an optometrist at Zionsville EyeCare, will be grand marshal of the Sept. 7 Fall Festival Parade.

“I was surprised and It’s an extreme honor,” Haines said. “I have the highest regard for the Lions Club. I know so many members and think they are amazing people. Their club is probably the poster club for a local service organization, with what all their members do in the community, all the great things they do. To be honored by a club like that means a lot to me.

“One thing I’ll make clear is I’m not a superhero as the theme of the festival. Our superheroes are our police, firefighters, first responders and men and women serving the country in the military.”

In recent years, Haines has attended with his wife, Julie, daughter, Lora Carter, and her two daughters, Audrey, 7, and Evelyn, 4. Carter and her husband, Brian, live in Zionsville.

“Audrey is going to be riding in the convertible and my wife will be driving,” said Haines, whose son lives in New York City. “It will be her first time riding in our (2005) Thunderbird convertible, and she’s excited. It was supposed to be in June for the Miss Indiana Parade and the parade got rained out.”

Haines, who has been a member of the Zionsville Optimist Club for 38 years, started as an optometrist in Zionsville in 1980 after leaving the Navy. Haines got his start in his childhood eye doctor’s practice, Dr. James Kramer.

“We worked together for 16 years and then decided to do our own thing,” Haines said. “I feel extremely fortunate to grow up and have my practice here. To me, the Zionsville community is the best in the Midwest.”

The parade will begin at 10 a.m. The route will travel down Mulberry Drive, west on Ash Street, then south down Main Street. Parade Director Michelle Shepherd said there will be approximately 90 unique entries.