You are at:Home»Current in Zionsville»Zionsville Community»Local foundation aids Zionsville family

For the last four years, Noblesville residents Amber Villars and her husband, Ben, have focused on running the Wayland Villars DIPG Foundation, which funds research that will lead to a cure in the fight against diffuse intrinsic pontine glioma, a malignant tumor that starts in the brain stem. 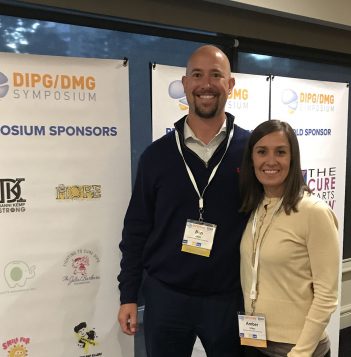 “We were concerned about some subtle symptoms he was displaying, clumsiness, drooling and headaches,” Amber said. “Our lives turned upside down after we realized how deadly this cancer was.”

Wayland received 6 1/2 weeks of radiation therapy and two types of experimental treatments —  one at Stanford University and one at Cincinnati Children’s Hospital.

“Unfortunately, the treatments were not enough,” Villars said. “In response, my husband and I realized we didn’t want this to keep happening to other families and knew we had to do something. Thus, the Wayland Villars DIPG Foundation was born.”

In early August, the Villars traveled to Sydney, Australia for their third DIPG/DMG Symposium. Founded in 2013, the hybrid conference’s mission is to inspire, form and fund new collaborations that lead to more effective treatments for DIPG and other pediatric brain cancers.

According to Amber, the DIPG/DMG Symposium is a group of foundations, which invite doctors and scientists to share their research. Grants are then provided to the most-promising researchers.

“My husband and I feel so blessed to be able to travel to attend the symposium,” Amber said. “We always leave encouraged and inspired to continue our efforts to raise money, awareness and to do what we can to fight for a cure for DIPG.”

Recently, the Wayland Villars DIPG Foundation supported a Zionsville family whose niece, Clare, is fighting DIPG. The Ronnebaums found out about the Villars and their foundation through the internet.

“I reached out to the foundation to see what support was here in Indiana to help the family from afar,” Emily Ronnebaum said. “It is so comforting to know that we have their support here locally, as well as the many other families affected by DIPG.”

According to Ronnebaum, her and her family are looking forward to attending the Wayland Warriors Fall Festival in November to help raise money for their foundation and DIPG research.