You are at:Home»Current in Zionsville»Zionsville Community»Zionsville resident gets Power of Children rant for books project

From an early age, Emma Meyer was convinced she could do more to help others.

“I just felt in my heart I wasn’t doing enough at my age,” she said. “I had seen people doing acts of kindness with different service things.” 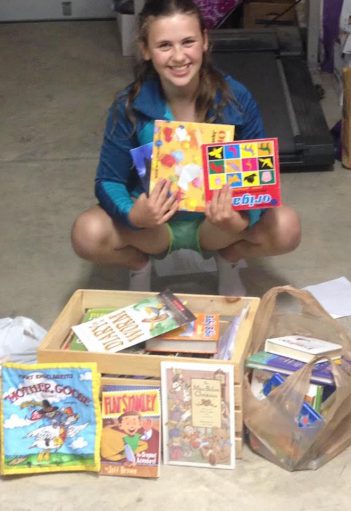 A Zionsville Community High School freshman, Meyer has devoted the past seven years to providing books for children. Her project earned her a Power of Children Award from The Indianapolis Children’s Museum

Meyer started her first library in an Indianapolis Public Schools classroom when she was 8 years old.

“I was able to collect books for a classroom that parents could take them home for the kids,” Meyer said.

Approximately a year later, she was diagnosed with a white blood cell disease, Langerhans cell histiocytosis, and was treated at Riley Hospital for Children for one year. LCH is a form of cancer. She has been in remission for the past few years but still has yearly check-ups.

Meyer, 14, spent a lot of time at Riley during treatment and noticed there wasn’t much for children older than 8 to do. She decided there needed to be books, so she expanded her original project and created Emma’s Bundles of Books and Joys.

“From there, people would continue donating,” said Meyer, who holds book drives.

At first, Meyer delivered the books and then went upstairs for chemotherapy treatment, her mother Theresa Meyer said. Theresa is a lecturer at Butler University’s College of Education.

“She wanted to do this,” Theresa said. “Her attitude was, ‘I can give back to others. I don’t need to be the one always being taken care of.’ I was just inspired by my own kid. (Her father) John and I both felt that way.”

Meyer is one of six students, including two from Indiana, to win the Power of Children Award and will be honored Nov. 15 during a special dinner and program at The Children’s Museum. The winners will receive a $2,000 grant from the Kroger Foundation to expand their philanthropic projects, and they may choose a partial college scholarship from IUPUI, the University of Indianapolis or Butler University. Meyer said she intends to use her grant to use her Power of Children Award money to expand her project nationwide and provide multi-language books, audio books and eBooks.

Part of Meyer’s project also has been supplying books to Riley teachers to help them teach classes.

“She is supplying school program supplies like flash drives and pencils,” Theresa said.

Theresa noted that the hospital goes through some supplies more quickly because they can’t be reused often because they need to be sterilized.

“She is giving supplies all year round,” Theresa said. “There are 11 teachers at Riley Hospital and one at St. Vincent. They are coming to her asking for supplies. That donation piece is very specific to student needs.”

Meyer said she plans to continue her efforts as long they help others.

“I would love to mentor in the future to help kids learn the importance of giving joy to others,” Meyer said.

Debbie Young, director of Power of Children Awards, said Meyer has made a difference by what she has done for so many people.