You are at:Home»Current in Carmel»Carmel Community»Veterans share 9/11 experiences with Carmel High School students

Roger Claffey was on duty as an operations officer for one of the squadrons at Grissom Air Reserve Base, near Peru, Ind., when terrorists attacked the U.S. on Sept. 11, 2001.

“When I got home that night, my daughter was going to Carmel High School and she told me she had to come home early,” he said. “She said they showed the planes flying into buildings, and a lot of kids were getting scared. She said when her classmates found out her dad was in the military, they told her her dad was going to die. That was one bad experience.”

Claffey visited CHS Sept. 10 to talk to students about his military experience in the aftermath of 9/11. 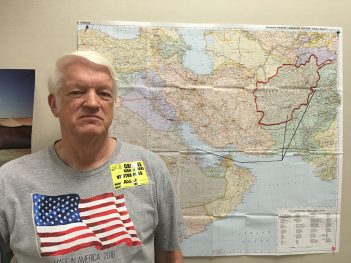 Roger Claffey pauses in front of a map he brought to show how the U.S. Air Force flew bombing missions into Afghanistan. (Photo by Mark Ambrogi)

Claffey, a 73-year-old Carmel resident who retired in December 2004, was an Air Force pilot for 34 years, starting in the Vietnam War. Claffey, who received a Purple Heart after being wounded in Vietnam, was on active duty for nine years and was in the reserves for 24 years at Grissom Air Force Base.

CHS social studies teacher Will Ellery realized most of his students weren’t alive in 2001 and decided to bring in veterans to discuss their experiences.

“We grounded all our airplanes after the attacks,” Claffey said. “We put six tankers on alert that night and flew fighters over the city because they were afraid of other terrorist attacks and hijackings.”

Six days later, Claffey said orders were sent to mobilize the unit, which meant rounding up commercial pilots in the reserves.

“We established the air bridge at different locations and the bombers, like B-52s and B-1s, would fly nonstop 23 hours to base so they could re-position and bomb the terrorists in Afghanistan,” he said.

Claffey said other operations were sent up in tents in other areas of the Middle East.

“The whole place is a desert. I think I saw one tree while I was there,” he said.

Claffey, who previously spoke at a Vietnam symposium at CHS, knew this time to bring maps and photos to keep students engaged. He saw a notice in Current in Carmel about the Sept. 10 talk and volunteered to return.

Claffey said he told the students when something horrible happens, learn about it.

Sophomore James Sproull said he learned more about what the war on terror was and what people did and saw in Iraq and Afghanistan.

“I also learned what life was like before 9/11 and after it happened,” Sproull said. “I talked to a veteran who had enlisted before 9/11, and he got sent overseas a lot to fight against the insurgents. We need to know what happened in the past and how to prevent it in the future.”

There were approximately 40 veterans at the CHS event spread out in small groups from all military branches.

“I wanted to illuminate 9/11 for these kids with people who had been on the ground and done this stuff,” Ellery said.