Michael Beck and Tim Brickley are accomplished recording artists and touring musicians who have an affinity for playing small venues.

That’s why they look forward to their Sept. 22 date at Carmel Clay Public Library, where they’ll perform a 50th anniversary tribute to Woodstock, the iconic 1969 music festival that featured dozens of the era’s top pop and rock artists. 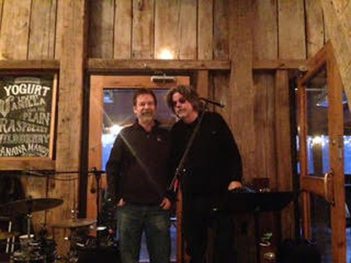 Beck, a percussionist, and Brickley, a guitarist, will play an acoustic array of songs that were performed during the three days of Woodstock, including selections by Crosby, Stills, Nash & Young, Credence Clearwater Revival and The Who.

“It’s just an hour that we play, but it’s just packed full of tunes everybody will know from that era and from Woodstock,” said Beck, a long-time musician who owns Anderson & Beck, a music-booking agency in Indianapolis. “Our niche is kind of that ’60s and ’70s vibe.  We do a lot of songs by (artists) that were at Woodstock and that type of sound.

Beck and Brickley, a music producer who owns Hit City Recording studio in Indianapolis, will perform at 2 p.m. in the Program Room at CCPL, 55 4th Ave. SE, Carmel. The free concert is part of an occasional music series offered by CCPL.

Although Sept. 22 will mark their first time playing at CCPL, Beck and Brickley frequently perform in libraries throughout central Indiana.

“Playing the library concert series is wonderful because everyone’s seated and everyone comes to hear the music,” Beck said. “You don’t have a bunch of sports TVs blaring in the background that a typical bar would have, so you have 100 percent attention of the crowd. They’ve come to see us perform, so it’s really a concert.

“It’s a wonderful thing to be able to do, so I love those kinds of situations.”