Hari Ganeshan had known for years his dog could provide comfort to others.

The Carmel High School senior learned firsthand how Copper, a Labrador retriever, could help when his family moved from Orlando, Fla., to Carmel in the middle of his freshman year.

“It was a bit stressful moving to a new environment,” Ganeshan said.

Beyond adjusting to making new friends, many of the classes Ganeshan took in Orlando didn’t transfer properly.

“I had to get acclimated to the whole situation,” he said. “Carmel was much further ahead in some classes than my school in Orlando, so it was stressful. Copper was very therapeutic and it would really calm me down when I got home. I realized the power of therapy dogs.”

Ganeshan, now a Paws and Think team therapy dog handler, said his family got Copper as a pet when he was in second grade.

“We took her to the basic obedience classes,” he said. “At that point, someone said to us that she was so well behaved we should look into therapy dogs.”

Ganeshan didn’t know at the time what therapy dogs did, so he did his research and discovered that therapy dogs live with families as normal pets but are trained to provide comfort to those in need in places such as schools and hospitals.

In Orlando, Ganeshan wasn’t old enough to be a dog handler but would shadow another handler. Copper, 9, started as a therapy dog when she was 3 years old.

Ganeshan, 17, was trained by Indianapolis-based Paws and Think two years ago. He said the training provided different situations to prepare the handler and his dog how to react.

Ganeshan helps with the Carmel Clay Public Library’s Paws to Read program once a month.

“Elementary school children, mostly first to third grade, get the opportunity to read to Copper to improve their confidence in their literary skills,” he said.

“There was one woman in Orlando who had severe Alzheimer’s, so she wouldn’t remember a lot of the people she came in contact with,” he said. “But as I visited her more and more frequently, she actually remembered Copper’s name. Every single time I met, she would reintroduce herself to me and tell me her story of growing up on the farm, but she would remember Copper from the experience of petting her.”

Ganeshan said most of the handlers tend to be older.

“There (are) not a lot of young people in this,” he said. “Some younger kids might find it hard to relate to seniors who aren’t aware of all the social media trends and a lot of school problems. Anyone can really benefit from the opportunity. It’s very helpful. Scientific studies have shown just being with animals, especially dogs, can help them.”

Ganeshan regards himself as an advocate for therapy dogs and their value.

“It’s rewarding getting to impact people’s days,” he said.

“It’s nice to see how he manages his time and is able, with Copper, to help others,” she said.

“We have 125 therapy dog handlers and we only have five or six that are under 18, so it is pretty rare for someone in high school who wants to do this,” Burton said. “It’s something we encourage. You can start as a junior handler at age 12. He is such a nice kid. The older people love seeing youth, so it’s great what he’s doing.” 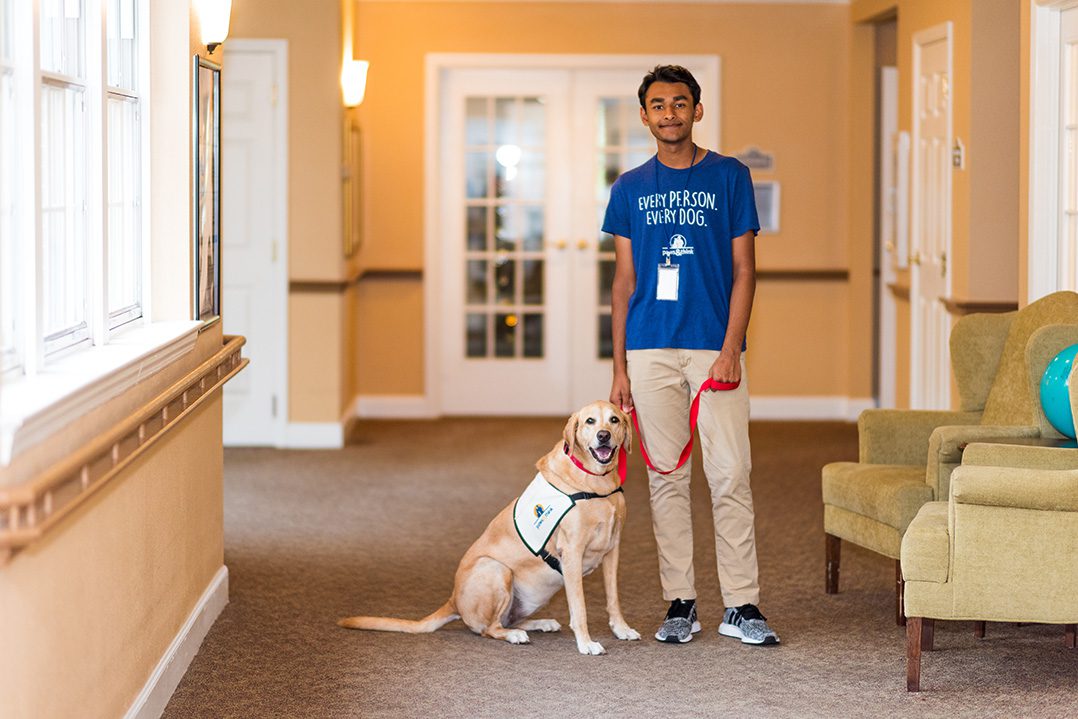 Carmel High School senior Hari Ganeshan with his dog, Copper, who has been a therapy dog since she was 3 years old. (Photo by Ben Stout)

Personal: Plans to major in biology and is interested in research as a career. His mother, Lalitha Jayaraman, is in the computer science field and his father, TG Ganeshan, is in finance. His parents were born in India.