You are at:Home»Current in Westfield»Westfield Cover Stories»Citizen of the Year: Bob Beauchamp to receive Beacon Award Sept. 20

Bob Beauchamp has played a major role in shaping the restaurant scene in Westfield, what has become known as Restaurant Row on Park Street. Beauchamp is being recognized for his efforts Sept. 20 at the annual Westfield Chamber of Commerce Lantern Awards, where he will receive the Beacon Award, also known as Citizen of the Year.

Beauchamp,  who has been in the antique-dealing business for decades,  said he and his wife, Michele, never imagined the area would become what it is today.  He said six years ago, business began to slow, and that’s when he began to search for other things to do.

“I was 70 years old, so we began to look toward starting Grand Junction Properties, the parent company for the purchase of all of our properties,” he said.

His inspiration for the Park Street development began when he noticed the barn that is now The Rail Restaurant and Bar, 211 Park St.

The barn at 211 Park St. and a house at 205 Park St. was part of one property when the Beauchamps made the purchase. A day care formerly operated at 205 Park St., followed later by a Greek’s Pizzeria that eventually relocated west on Park Street. Now, Cone + Crumb is housed at 205 Park St.

When Rail owners Toby and Melanie Miles approached the Beauchamps about building a restaurant in the barn, they weren’t keen on the idea.

“Ultimately, Toby came along and they called us and they were like, ‘We would like to talk about putting a restaurant in the barn,’” Michelle said.

At the time, the barn had no utilities. Bob said he remembered the barn being full of bats and equipped with only a single light bulb hung from the ceiling with an extension cord running to the house next door.

However, after the Miles said they used to work with restaurant owner Keltie Domina and they explained their vision, Michelle warmed to the idea of the restaurant. Six months later, the Rail Epicurean, now the Rail Restaurant and Bar, opened.

As for future additions to Park Street, Bob wants to see the Midland Trace Trail continue behind the restaurants on the south side of the street.

“I never imagined that even on a Tuesday or Wednesday night, the parking lot would be full, the street full of people and all the restaurants are busy,” Bob said.

“It’s a bit surreal for us,” Michelle said. “We love sitting there and watching it happen. It definitely evolved.”

The Beauchamps visit Restaurant Row for dinner or lunch several times each week.

“The end result of what it has all evolved into is part of the charm of what makes the street what it is,” Michelle said. 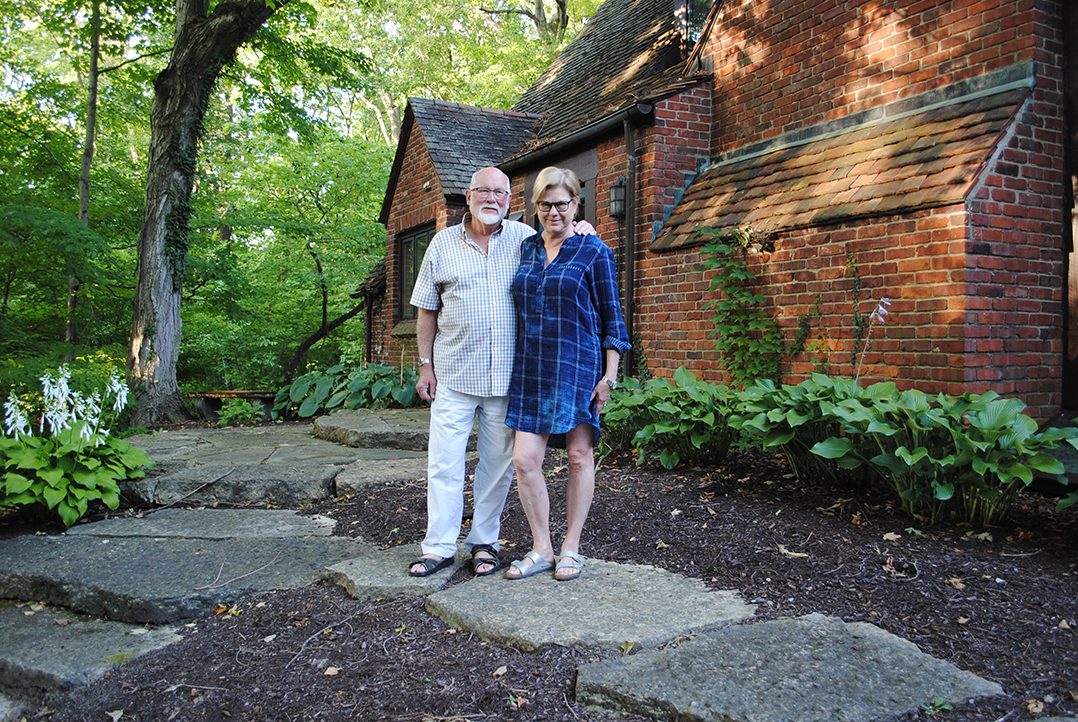 Bob Beauchamp pauses at his Westfield home with his wife, Michelle.

About the Beacon Award

The Beacon Award is given annually to an individual who has made a significant contribution to the community in the past year that is above and beyond their normal work. The individual also has provided leadership within Westfield and/or Westfield Washington Township, and the individual lives or works in Westfield. For more about the Lantern Awards, visit lantern-awards.org.