Now, she gets a shot at the title role. 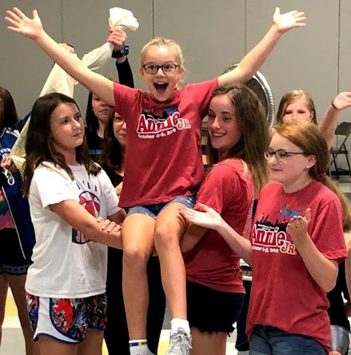 “I’ve always been pretty good at memorizing. It has been a challenge to learn to sing Annie’s role while protecting my vocal cords,” Kirkpatrick said.

Kirkpatrick said she looks forward to being with her friends and performing with them.

“I’ve also made new friendships throughout rehearsals,” she said. “I’m also looking forward to singing and dancing on stage.”

This will be Kirkpatrick’s fourth play.

“I’ve always enjoyed singing, dancing and being on stage,” Kirkpatrick said. “This is my second St. Simon play and I have done two summers at a drama camp with a performance at the end of the week.”

Suzanne Collins, a Lawrence resident and founder of the program, is the director. This is the eighth season for the school to present a musical.

The program is for fifth- to eight-graders.

“We have kids who were like a little mouse and couldn’t even talk (due to nerves) and grew into being our leading people,” Collins said. “Most of our kids are performers, but we also train them with backstage as the crew.”

Approximately 70 members are in the cast and crew.

“We don’t cut anybody. If they can make the commitment, they’re in,” Collins said. “That’s the biggest challenge because it is such a large production, but theater people help theater people (with costumes). We have an army of parents whose kids are in it who take on different projects, whether it’s working on props and lighting.”