You are at:Home»Current in Carmel»Carmel Community»Archie Manning reflects on changing world of football, health

For Archie Manning, a trip to Indianapolis is always enjoyable.

Manning was a frequent visitor during his son Peyton Manning’s career with the Indianapolis Colts. 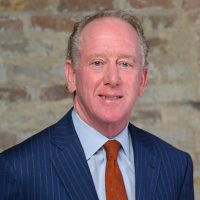 “We came to games for 14 years and came at other times to see the family,” Manning said during an interview Sept. 24 at St. Vincent Neighborhood Hospital in Noblesville.

Manning became affiliated with St. Vincent along with his son’s involvement with Peyton Manning’s Children Hospital at St. Vincent Indianapolis.

Manning, 70, had a 13-year NFL career, primarily with the New Orleans Saints. He had short stints in Houston and Minnesota.

“The world has changed in a lot of ways,” he said. “When I played, there was not much talk about nutrition.”

Manning said he and his teammates ate steak for a pre-game meal.

“A nutritionist has since told me that’s probably the worst thing you could eat before playing,” he said.  “There is a lot of help out there if we are just conscious of it, starting with screenings and different things you can do. What we are emphasizing today is just to be proactive about your screenings and your care and different ways to live a healthy life and better life.”

Manning spoke at a private event about his life as an NFL quarterback, being a father of two NFL quarterbacks, Peyton and Eli Manning, and being proactive when it comes to health. He was joined by a panel of Ascension St. Vincent physicians and specialists on healthy aging.

After his career, Manning said he tried to exercise but wasn’t that knowledgeable about nutrition.

“I was fortunate for a number of years, but my old football injuries kind of caught up to me,” he said. “I’ve had the knee replacements. I’ve had the back fusions. I’m not getting around very well, but I am glad to report my overall health is fine.”

Manning said he doesn’t know how many concussions he suffered and doesn’t want to know. However, he doesn’t think he had many.

Manning never had good pass protection with the struggling Saints. He was sacked 337 times in 10 seasons with New Orleans. The Saints had nine losing seasons and finished .500 in his other season. Still, Manning made the Pro Bowl twice.

“They didn’t protect the quarterback in those days like they do now,” Manning said. “The officials protect quarterbacks better today, which is a good thing.”

Manning, who still lives in New Orleans, said there solid strides have been made in safety in football at the pro, college and high school level.

“People have been working really hard the last four to five years to make our game safer,” Manning said.

His grandson, Arch Manning, is starting as a freshman quarterback at Newman High School in New Orleans. Eldest son Cooper Manning is Arch’s father. Cooper, Peyton and Eli all played at Newman. Cooper Manning had received a scholarship to play for the University of Mississippi but was diagnosed with spinal stenosis, a narrowing of the spine and pinching of the nerves, during a preseason practice and had to retire from football.

Peyton played 13 years with the Colts without missing a game before he missed the 2011 season with a neck injury. He returned to play four seasons with the Denver Broncos, winning a Super Bowl in his final season.

“He was so fortunate to come through those four surgeries and then come back and have four more years of football. Unfortunately, it wasn’t with Indianapolis,” Manning said. “But it was four good years. They won 50-plus games and went to two Super Bowls. Eli has never missed a single game in all his football life because of injury. He’s been an iron man. He’s been able to play when some others wouldn’t have played.”