Tyszka played Fanny Brice in “Funny Girl,” a role Streisand made famous in the 1968 movie. 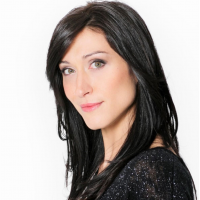 “People kept saying it like I should be playing (Streisand), which was frustrating to me,” Tyszka said. “If they were that weird about something that wasn’t even about Barbra, I can’t imagine what people would be like if I was doing her.”

Tom Alvarez and Dustin Klein assured her the Magic Thread Cabaret audience isn’t like that.

“They really like to hear your spin on things and hear your personal story,” Tyszka said.

Tyszka will cover Streisand’s six-decade career in “Singing Streisand: An Evening with Brynn Kathryn Tyszka” Oct. 11-13 at The Cat, 254 Veterans Way, Carmel. Tyszka will be joined by special guest Katy Gentry, who headlined her own Magic Thread Cabaret show, “Katy Gentry: Judy Garland LIVE!” in 2018.Tyszka and Gentry will sing duets made famous by Garland and Streisand.

“It will be nice to take a minute break while she sings the first part of the song,” Tyszka said

“She does a lot of covers of jazz. ‘Down With Love’ is in there and that’s definitely one of my favorites,” she said. “I like some of the (Stephen) Sondheim stuff she does and some of the musical theater, in general.”

Tyszka said she enjoys tackling classic Streisand songs such as “Evergreen” and “The Way We Were.”

Tyszka, who recently appeared in Actors Theatre of Indiana’s production of “Dirty Rotten Scoundrels,” moved to Carmel from Rochester, N.Y., three years ago.

“I first moved here when I was five months pregnant with my first baby,” she said. “Now, I had another one, so I was very pregnant or nursing my first two years here.”

There will be a free party for opening-night attendees at Peace Water Winery, 37 W. Main Street, Carmel, immediately following the Oct. 11 show. Fifteen percent of wine sales will be donated to Magic Thread Cabaret. Bazbeaux will donate pizza.