For a normal football tailgate America’s most popular item, as we’ve said time and again, is the sandwich. That’s because it is so convenient and portable, and one can literally put anything in and on it. Sandwiches are inexpensive and have a certain amount of nostalgia. Most people have fond childhood memories of their lunchbox favorites like tuna salad, bologna or ham and cheese. And then there’s that first hamburger the folks bought at a drive-in or that hot dog at the ballpark.

Last season we talked with Joey Chestnut the winner of the hot dog eating contest at Nathan’s Famous Hot Dog Emporium. Televised by ESPN on the Fourth of July, from the corner of Surf and Stillwell on Coney Island. Joey ate 71 dogs at the contest this year. He admits he still loves hot dogs even between these contest events. He gave us some tips to pass on for tailgating which we explained last season. Since hot dogs are still very popular we had to find a way to “kick them up a notch”.

Knowing that bacon makes everything better, this season we’ve decided to find a way to add bacon and cheese to tailgate hotdogs. Almost 75 years ago a kid-popular Chicago chain (Peter Pan Restaurants) featured a Francheezie. This was a jumbo dog stuffed with American cheese and wrapped in bacon. We’ve worked with this hot dog preparation and have developed a simple recipe to dazzle the guests at your tailgate party. 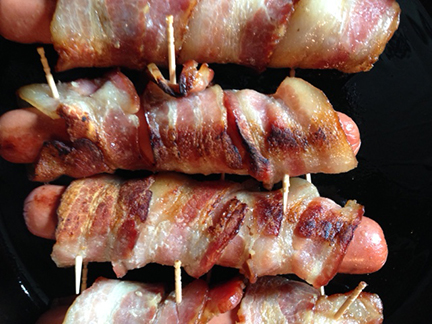 Preparation, the night before:

Bacon: Preheat oven to 400 degrees. Place ten slices of bacon on parchment paper in a baking pan. Bake for 15 minutes, then drain and check the bacon. Repeat this for five more minutes until the bacon is safely cooked but not crisp. You’ll crisp it tomorrow at the tailgate. Remove the bacon and place it on paper towels to cool 30 minutes in the refrigerator.

Hot dogs: Cut a slit into the hot dogs to hold the cheese. Fill each dog with rectangular strips of cheese that do not protrude much above the slit. Wrap each hot dog with the cool bacon. Two slices to each dog. Secure the bacon with toothpicks. Pack these Francheezies in a serve and seal plastic container and refrigerate overnight. Then pack in your food cooler for transportation to the game.

Preparation, at the game:

Place the Francheezies on your grill or in a cast iron frying pan. Cook each side, turning them with tongs, until all four sides are as crisp as you like. After the bacon starts to crisp, remove the toothpicks so that they do not prohibit turning of the Francheezies. The cheese will melt, and the hot dogs will cook inside the bacon wrapping.

You may find that these Francheezies are so tasty that you won’t need any condiments. To make these dogs even more cheezie, it is acceptable to put extra cheese in the bun before you add the meat. Serve these treats on simple hot dog buns with any condiments (except ketchup) accompanied by sides of coleslaw and dill pickle spears.