Justin Miller, executive chef of Carmel’s Anthony’s Chophouse and 3UP, will have a chance to show his skills at a national competition.

Miller was named to Team Indiana, which is a group of Hoosier chefs and home cooks heading to Dallas to compete in the Oct. 16-20 World Food Championships. 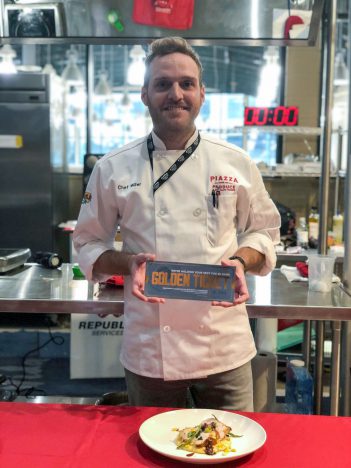 Miller received his golden ticket to the WFC by winning the Taste of Piazza 2019 competition in Indianapolis. He will be assisted at the competition by Evan Slusher, Anthony’s Chophouse’s executive sous chef. Slusher, a 2011 Noblesville High School graduate, also assisted Miller in the Taste of Piazza in August at Bankers Life Fieldhouse. The duo prepared a turkey dish.

“Judges critiqued it on flavor and taste, No. 1, (and) presentation and safety and sanitation as you are preparing during the competition,” Miller said. “We snuck out a win by two points. It was stiff competition.”

The group is representing the state through the Culinary Crossroads initiative, with backing from the Indiana Office of Tourism Development and other underwriters.

“It’s a unique opportunity to show not just the cooking side of Indiana but Indiana products,” Miller said.

Miller said the golden ticket put the duo in one of 10 categories. There are 50-plus competitors in each category.

“We’ll be in the recipe category, which is sponsored by Kind spice, which is a brand that does organic and herbal/natural ingredients,” Miller said. “Our first round is decided for us. We have to make a vegan dish. Our second round, we will present our signature dish. Out of the 60 competitors in our category, the top 10 are selected, if we are fortunate enough to get that far.”

Piazza Produce is one of several sponsors. There are 1,500 competitors in the 10 categories.

“It’s cool to hear that people working with you in your organization have an opportunity like this,” said Anthony Lazzara, Anthony’s Chophouse and 3UP owner. “It’s an opportunity for them to put their face on a map across the nation and it’s cool they are representing our company.”