You are at:Home»Current in Noblesville»Noblesville Business Local»Primeval Brewery opening slated for November

A brewery reminiscent of a European beer hall soon will open in downtown Noblesville. Brewery co-owner Nathan Compton of Castleton said the plans are for Primeval Brewing to open its doors in November.

The brewery is the first brick-and-mortar location for Compton and fellow co-owner and Fishers resident Tim Palmer, but the pair is not new to brewing beer. Between the two of them, they have 20 years of brewing experience and have earned more than 170 awards. 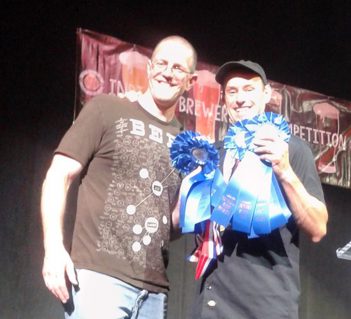 When deciding where to open the brewery, they said downtown Noblesville had a certain appeal.

“We wanted to create a place that feels like an old-world European beer hall, and so downtown Noblesville was one of the areas we targeted when looking because of the historic nature,” Compton said. “We loved the eclectic mom-and-pop shops down here. We found this location (960 Logan St.), and it’s a building built in 1909.”

Previously, the building was the home of Platinum Living Fine Art Gallery, and Compton said it’s been a “huge project” to transform the interior to befit a brewery. Compton and Palmer signed the lease for the building in February 2018 and have been renovating the building since.

Upon opening, Primeval Brewing will have 12 taps and plans to offer a core line-up of a German, helles-style lager, “Welcome to Helles;” a Hefeweizen, “Edelweiss;” an English porter, “Sacred Seduction;” a hybrid, German IPA , “Maxwell” and a Rauchbier, or a smoked German lager, “Rauch My World.” Three to four of the remaining taps will be guest taps, and three to four taps will be rotating taps by Primeval Brewing.

“We love traditional styles, and we are a little bit against the grain in terms of what an American craft brewery is intended to be,” Compton said. “We take more of a traditional route. We focus on German, British and Belgian styles of beer.”

When determining the beer names, Compton said “Maxwell” has a story behind it.

“When we started demoing out the art gallery, we wanted to go back to the old brick walls,” Compton said. “We uncovered a wall and found a faded sign that said ‘Maxwell.’ After doing some research, (we learned) in 1914 this was a showroom for Maxwell Motor (Company), a long-since defunct automobile company. It was based in Indiana back at the time. The Maxwell beer was named after that.”

The logo will remain on the wall when the brewery opens.

In addition to beer, Primeval Brewing also will have wine and a cocktail menu featuring liquors from craft distilleries in Indiana. It also will have a small food menu with appetizers, sandwiches, soup and a kids’ menu.

Upon opening, hours of operation will be from 4 to 10 p.m. Tuesday to Thursday, 4 to 11 p.m. Friday, noon to 11 p.m. Saturday, noon to 6 p.m. Sunday and closed Monday. For more, visit Primeval Brewing on Facebook.