At 79, Bill Medley never considers cutting back his performing dates.

“I tell other people my age to just keep doing what you are doing,” he said. “If you play golf, keep playing golf every day. Don’t stop. Don’t give up. I love what I do. I’m scared to death if I would retire and stay home, I would be in real trouble.” 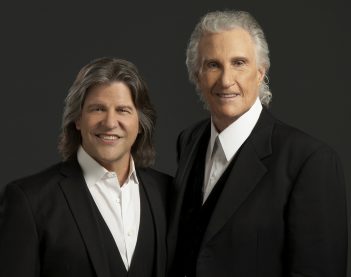 Bucky Heard, left, and Bill Medley will perform at the Palladium Oct. 27.

The duo will perform at 7 p.m. Oct. 27 at the Palladium at the Center for the Performing Arts in Carmel.

“It’s always fun to go into different cities and get to perform in front of different people and hear their stories,” Medley said.

Medley and the Hatfield began singing together in 1962.

“Bucky was in Branson, and we were good friends,” he said. “I had a lot of people ask me to keep The Righteous Brothers music alive. In 2016, Bucky and I hooked up. He’s a really great singer. I don’t think you can ever replace Bobby. He was one of the great, great singers to come out of the ’60s. Bucky was a big fan of Bobby. He sings like Bobby but doesn’t try to be Bobby at all. Our intention is to pay tribute to Bobby and The Righteous Brothers music.”

As part of the concert, Medley will sing  “(I’ve Had) The Time of My Life” from the 1987 movie “Dirty Dancing” with his daughter McKenna Medley. The original duet was Medley and Jennifer Warnes.

“There are two or three left-hand turns in the show, but we make sure we get all the hits in,” said Medley, who has regularly performed with Heard at Harrah’s in Las Vegas since 2016.