You are at:Home»Current in Noblesville»Noblesville Community»Carr named firefighter of the year

A Noblesville firefighter recently was named as the 2019 Indiana Firefighter of the Year. 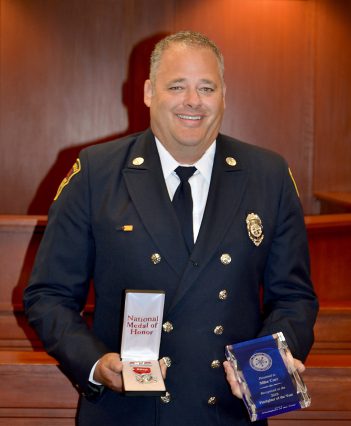 “Mike Carr has been a tenacious advocate of our active shooter program since he started building it over five years ago,” Noblesville Fire Chief Greg Wyant said. “He is well respected by our firefighters and our police officers for his expertise on the topic. I cannot think of a more fitting honor for him to receive.”

Carr was nominated primarily because of his work in assessing a need for an active-assailant response plan and working to develop, implement and train members on the plan. This work was utilized when NFD was called to Noblesville West Middle School on May 25, 2018, in response to an active shooter.

Today, NFD continues to revise and improve its plan, training members on new EMS skills and coordinating joint trainings with the police department.

“I would like to thank Division Chief John O’Neal for the letter of recommendation and the rest of the fire administration and Mayor John Ditslear for allowing and encouraging the development of the active assailant program,” Carr said. “I also want to thank firefighter Todd Watson, whose input and teaching skills have been a huge asset to this program and to the fire department. Finally, thank you to the fire crews for their flexibility and willingness to learn, give input and train for the betterment of the city we serve.”