You are at:Home»Current in Carmel»Carmel Community»Carmel resident launches ‘Vote for Gerry Mander’ campaign

A Carmel resident’s concern about threats to democracy led to the inaugural Vote for Gerry Mander Victory Dinner on Nov. 5, Election Day. 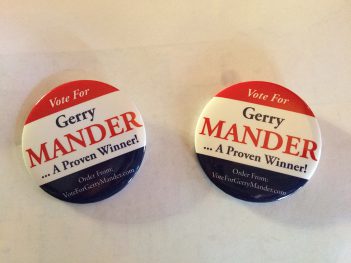 “The Vote for Gerry Mander initiative is a light-hearted, tongue-in-cheek approach to a serious issue facing our nation, gerrymandering,” said Paul Ash, founder of the Vote for Gerry Mander movement. “Gerrymandering threatens the integrity of our democratic elections by preventing the value of each vote to count equally. (All) political parties are tempted to gerrymander voting districts to increase their chances of success.”

“The purpose of the Vote for Gerry Mander activity is to increase discussion and awareness, hopefully to encourage elected officials in all states to develop electoral districts that are fair and square, as defined in our state and national constitutions,” Ash said.

Ash said Vote for Gerry Mander is a grass-roots effort, and anyone concerned with fairness in elections can participate.

“It is not an organization and there are no regularly scheduled meetings. Citizens can participate by discussing gerrymandering,” he said. “The most effective way to start a conversation, even with a stranger, is by wearing a ‘Vote for Gerry Mander … a proven winner’ lapel button.”

Although there not regularly scheduled meetings, Ash said there will be victory dinners after all elections, including primaries.

“This is in keeping with the ‘soft’ and humorous approach to this serious issue,” he said.