For Matt Bays, his role could be considered a slight bit of typecasting.

On a personal note, Bays relates to his character Buddy in “Elf The Musical.”

“He’s a happy-go-lucky person and so am I,” Bays said

Bays plays Buddy in Civic Theatre’s production of “Elf The Musical,” which runs from Dec. 6 to Dec. 28 at The Tarkington at the Center for the Performing Arts in Carmel. 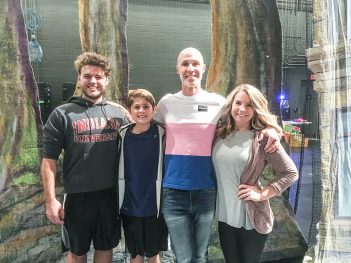 The story centers on a young orphan, who accidentally climbs into Santa’s bag of gifts and is transported to the North Pole, where he is raised as an elf by Santa’s elves.

“I thought maybe I was too old for the part, but it worked out,” said Bays, a 49-year-old Westfield resident.

Bays said he was familiar with the 2003 movie starring Will Ferrell as Buddy but had never seen the 2010 Broadway musical, which was inspired by the movie.

“It’s one of our staples I watch every year with my two daughters,” Bays said of the movie. “Buddy is spontaneous. He’s loving and he’s little naive, a trusting individual.”

Bays did not do musical theater for 25 years because he was doing other music in church.

Noblesville resident Emily Schaab sees a bit of herself in her character of Jovie.

“I find the character true to who I am a little bit,” Schaab said. “She’s a little sarcastic and a little sassy. It’s been a lot of fun.”

Schaab said the music is fun and heart-warming.

“Jovie has one song by herself, and I sing throughout the show with Buddy and the ensemble,” Schaab said.

The show is Schaab’s third with Civic in 2019 and her first lead Civic role. She previously was in “Newsies” and “Mamma Mia!”

“We’re having a blast. That’s something that’s been the case at all three shows I’ve done at Civic,” Schaab said. “It’s always a good environment.”

“I like the role because I’m able to develop my character,” Boyce said. “It’s a very fun role to play. I love the movie ‘Elf,’ so it was fun to bring the role to the stage.”

Boyce said he watched some musical versions to help better develop his character.

“I have to speak with a New York accent, so developing that is a little hard,” Boyce said.

Boyce appeared as Dill Harris in “To Kill a Mockingbird” earlier this year on the main stage. He was in Jr. Civic’s productions of “James and the Giant Peach” in 2018 and “Shrek The Musical” in 2019. He had to learn a Southern accent for Dill and a British accent for James.

“I also get to be part of the ensemble and take part in a few of the crazy, fun dance numbers,” Schlabach said. “I always loved the movie. It’s fun to do a high-pitched elf voice. It comes pretty natural to do that voice, but it’s something I never tried on stage before.”

He also was in “Newsies” and “Mamma Mia!”