Stephenie Soohyun Park is returning to Indiana Repertory Theatre’s “A Christmas Carol,” but her assignment is a bit more difficult.

Park made her IRT debut in “A Christmas Carol” as Christmas Past and she is now playing the roles of Belle, Lady of Charity, Prudence and Laundress. 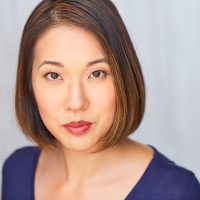 “I’ve always thought Belle was a difficult role because her story is so fast. In 10 minutes of stage time, she falls in love, has her heart broken and finds happiness with someone new,” Park said. “I love the challenge, though.”

When she was 9 years old, Park played Belinda Cratchit in a community theater production of the show.

Park, who grew up in the Chicago suburbs, moved to Indianapolis with her husband and two sons 1 1/2 years ago.

Park has had some small roles in TV shows and films.

“I love on-camera work and can’t wait to hop on another project,” she said. 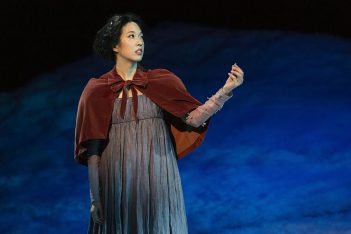 Stephenie Soohyun Park as Belle in IRT’s production of “A Christmas Carol.” (Photo by Zach Rosing)

Among the shows she has appeared in are “Chicago Med,”  “Boss,” “Chicago Fire,” “Empire” and “Patriot.”

“When I was shooting a small role for ‘Patriot,’ an Amazon show, I found out that I’d have to fly to Prague (in the Czech Republic) to shoot an outdoor scene,” Park said. “My older son was 7 months old at the time and wouldn’t take bottles, so production allowed me to alter my travel arrangements so that he and my husband could accompany me. We added a few days to our trip for sightseeing, and even with a jet-lagged infant, Prague was magically beautiful.”

One of her favorite roles was originating the part of Lauren Yee, the real-world playwright and lead female character in “King of the Yees,” at Kirk Douglas Theatre in Culver City, Calif.

“Lauren is a brilliant writer, and there’s something very satisfying about doing culturally specific theater,” Park said. “I felt like I was able to share a large piece of my own story.”