You are at:Home»Current in Westfield»Westfield Community»WHS student enjoys gluten-free cruise

This cruise was definitely designed for Elliott Hodgin.

The Westfield High School sophomore is affected by a gluten intolerance.

Hodgin and his family were on the inaugural Celiac Cruise on Royal Caribbean’s Mariner of the Seas Jan. 17-20. The cruise started in Florida and went to the Bahamas, including CocoCay, a private island for Royal Caribbean guests in the Bahamas. 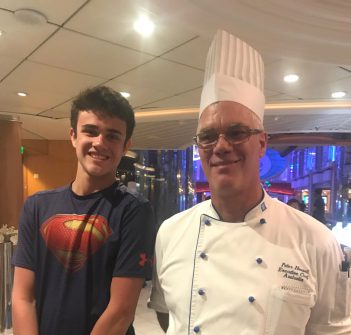 “It was really amazing,” Hodgin said. “There was a dedicated gluten-free kitchen. It took one year and they trained all the chefs to cook gluten-free. They had us separated off (from other passengers’ dining) so that there was no chance of cross contamination.”

“The diet change almost diminished ongoing headaches, stomach pains and iron deficiency,” she said. “A lot of times, people feel doomed having to go gluten-free, but it’s not that way at all.”

Elliott Hodgin said one speaker stressed the strict protocol of remaining gluten-free and how it can lead to a better quality of life.

“This is the first actual trip I felt comfortable eating,” Hodgin said. “Usually, I go on a vacation and there is a struggle finding gluten-free foods. You are really cautious.”

On the cruise, Hodgin didn’t have to worry about asking questions about the menu and kitchen.

“It was great to see all the other passengers happy and relieved. They felt like they belonged with everyone else on the cruise because they got to eat what we can eat,” Hodgin said.

Hodgin attended the Inaugural Gluten Free Teen Summit in Orlando two years ago and is about to become a mentor to those new to the gluten-free lifestyle. Hodgin is a mentor of Gluten Free Indy and has led two meetings for younger children.

Hodgin said he enjoys being a mentoring children.

“It’s important to make sure people are eating the food that will help them and not hurt them through their lives,” he said. “On the trip, there was teenager time and it was good to talk to them about our lives being gluten-free. Some were new to the diet and others have been on it their whole lives.”

Also on the cruise was Christine’s husband, Michael, and daughter, Chaiah, 10.

“Chaiah recently had the testing and she has a lot of markers for celiac disease,” Christine said.

“People can travel without the horrible anxiety of, ‘Will I be sick or will people give me dirty looks for asking questions?” she said.