The Westfield High School Dance Marathon will return for the fourth consecutive year from 5 to 11 p.m. Feb. 22 at the high school, 18250 N. Union St. 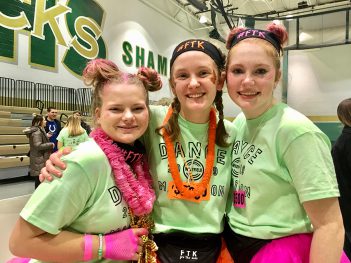 Dance Marathon began at Indiana University in the 1990s as a fundraiser for Riley Hospital for Children. Since then, it has grown nationwide to benefit children’s hospitals.

“Westfield’s started our freshman year, so this is the fourth year,” said Sydney Clifford, senior student and club president. “The first event was in 2017, and it has just grown substantially since then. At the high school, there’s an overwhelming presence of acceptance of the club.”

Participants fundraises much of the year for the event.

“We started fundraising in May (2019) doing a bunch of different events like a lemonade stand, a battle of the bands, carwashes, dine to donate,” Clifford said. “We have a ton of ways we reach out to get money along with sponsorships and individual fundraising.”

This year, the group expanded to other schools in the district.

“One thing we really focused on this year was expanding Dance Marathon out of just the high school and into more of our community as well,” said Maddie Hunter, vice president of the WHS club. “This year, we started a middle school marathon and also put on events at the elementary schools called mini-marathons.”

“The mini-marathons were modified versions of Dance Marathon,” said Alexis Paterson, vice president of the board. “It was two to three hours with a bunch of dancing and stations and activities for kids to do. We would charge $5 to get in, and that’s how we raised money.”

The middle school marathon, set for Feb. 21, will mirror the high school’s.

At the high school marathon, there will be inflatables, Zumba, games, basketball tournaments and other activities.

Registration for the marathon is $10. For more or to donate, visit secure2.convio.net/rcf/site/TR/DanceMarathon/DanceMarathons?pg=entry&fr_id=4021.