You are at:Home»Current in Fishers»Fishers Community»Fishers resident recognized nationally

A Fishers resident has received national recognition for his long career in insurance.

Last month, Wayne McHargue received the Albert Nelson Marquis Lifetime Achievement Award. Presented by by Marquis Who’s Who, the award recognizes individuals nationwide who have demonstrated leadership, excellence and longevity in their profession. 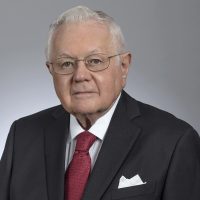 Recipients have their information published annually in the “Marquis Who’s Who” book, and the same information also is published on a website, serving as a resource for recruiters looking to fill positions.

At 83, McHargue said he’s not looking for a new job, but said the award is a nice capstone to his career in insurance. He said he’s probably the oldest living employee of American United Life.
“I started with American United Life in 1965 and am still contracted with them,” he said. “That’s 54 years. I really don’t plan to ever retire. Retirement and having nothing to do, that’s when (people) can go downhill. I have felt that diet, proper rest and mental stimulation are important. I go up to the health club and do my 3 miles, look around and don’t see anyone my age. I hope to be doing my 3 miles in 10 more years.”

McHargue graduated from Indiana State University, where he served as a graduate assistant to the dean of men. He was elected to Blue Key National Honor Fraternity, Beta Gamma Sigma national scholastic fraternity, Gamma Iota Sigma international honor society and Who’s Who in American Universities and Colleges. He also was elected president of Delta Sigma Pi professional business administration fraternity during its first year on campus, when it achieved a perfect score in chapter efficiency with the national organization.

As an alumnus of Indiana State, McHargue served as president of the Indiana State University Insurance Advisory Council during its first year, and it raised more than $4 million for the insurance program. In 1993, he endowed a scholarship, and in 1998, he received the School of Business Outstanding Alumni Award.

In the insurance field, McHargue earned two master’s degrees and seven professional designations. He formerly served as president of the Indiana State and Indianapolis Association of Life Underwriters, the Indiana State Association of Health Underwriters, the Central Indiana Chapter of the Society of Financial Service Professionals, NAIFA-Indianapolis, Inc., the Estate Planning Council of Indianapolis, the Castleton Sertoma Club, the Phi Kappa Psi Alumni Club and the Delta Sigma Pi Alumni Club. He was awarded the Hoosier Life Underwriter Award by the Indiana State Association of Life Underwriters. He also served on the Board of the 30,000-member American Society of CLU & ChFC and was awarded its Paul S. Mills and James Erb scholarships. He is a past qualifying and life member of the Million Dollar Round Table.