However, in recent years, the Greyhounds have been led by stars such as Kelly Pash, Claire Adams, Trude Rothock and Veronica Burchill, with multiple career titles.

This year was a bit different since Carmel had no individual champion returning.

“We knew we had to have everyone clicking for this to be a successful meet,” said Greyhounds coach Chris Plumb, who won his 14th girls state title. “We knew we didn’t have returning champions. We knew we had people that could emerge. I feel like this team came together at the right time to perform.”

Carmel won with 426.5 points, the fourth-most in meet history, to easily win its 34th consecutive state swimming title Feb. 15 at the Indiana University Natatorium at IUPUI in Indianapolis. That extends their national state high school record for consecutive state titles in any sport or gender. Fishers was second with 208 points.

Carmel had at least two participants in every individual event, except diving, and had three in three events.

“This group has probably come farther than any group we’ve coached,” Plumb said. “A year ago we weren’t really sure what we would have. We knew we had to put a lot of work into it and they would have to come together.  The leadership and the tradition allowed those unknowns to emerge and step forward for this meet.”

The Greyhounds had two individual champions and won all three relay races. 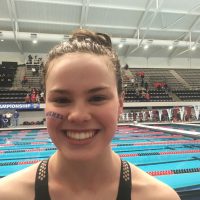 “We had great senior leadership, but we have great young athletes who are scoring lots of points who will come back next year and continue our success,” Plumb said.

Sophomore Gretchen Lueking captured the 200-yard freestyle, placed second in the 100 freestyle and was on two winning relay teams, the 200 and 400 freestyle teams.

“I think the key was sticking to my training, knowing I can do whatever I put my mind to and just trusting everything I’ve been doing this whole season,” Lueking said.

She was joined by her sister, Meredith, on the 200 medley relay.

“My sister is a senior, so it’s been a lot more fun to do it with her by my side,” Berglund said.

Also on the 200 medley relay team were juniors Maggie Love and Colleen Duffy.

Duffy and Lueking were joined by junior Madelyn Christman and senior Avery Williams on the 200 freestyle relay.