For Maureen McGovern, there is one thing that really stands out about participating in a 4 Girls 4 concert.

“What I love about the show, when we are backstage or on the stage, it’s a laughing fest for us,” she said. “We have such a good time and it’s the most laughter I have in 24 hours than I can ask for. We all love each other’s talent as well.” 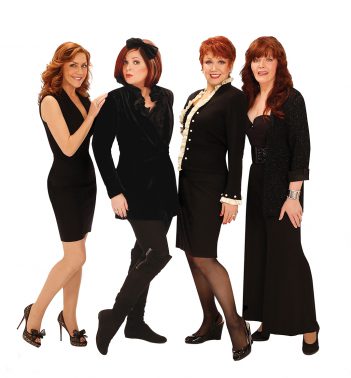 The 4 Girls 4: Broadway’s Leading Ladies in Concert is set for an 8 p.m. Feb. 29 performance at the Palladium at the Center for the Performing Arts.

“It’s the icing on the cake every year we get together,” McGovern said. “It was sisterhood at first sight.”

The group’s first concert was March 2014. McGovern didn’t know any of the other women well before it began but remembers seeing McKechnie in “A Chorus Line.”

“That changed my life seeing the show,” McGovern said. “When she sang ‘The Music and the Mirror,’ I just wept and wept. I met them all in passing before getting together.”

McArdle was the original in the title role of “Annie” on Broadway.

McGovern said she knew Kaye Ballard, who was part of the original 4 Girls 4 tour with Rosemary Clooney and Helen O’Connell, from appearing together in “The Pirates of Penzance.”

“I remember seeing a TV version of it,” McGovern said.

So, when she was approached about performing in a new version, she quickly agreed. They have been performing together since 2014.

Sometimes, another Broadway leading lady will step in to join the group.

“We all have other concerts and other things, so we’re not always ready to do the next show,” she said. “Everybody wants to do it because it’s such a fun thing.”

McGovern said the women sing together and then each has a 20-minute solo set of five to six songs.

A special moment in her show is when she sings “Over the Rainbow” a cappella.

McGovern first came to prominence for “The Morning After,” an Academy Award-winning song from the disaster film “The Poseidon Adventure.” The song is always a staple of her performances.

She then sang “We May Never Love Like This Again,” which won the 1974 Oscar for best original song for “The Towering Inferno.”  McGovern had a brief appearance in the movie playing a singer. She also did a song in “Gold,” a British disaster film. The song, “Wherever Love Takes Me,” was nominated for an Academy Award in 1974 as well.

“I was known as the disaster theme queen,” McGovern said.

McGovern, who was born in Youngstown, Ohio, and now lives in central Ohio, said she does short concert tours.

McGovern does a lot of special performances in Ohio in hospices and in a women’s prison.

“To think you can go someplace and take away their pain for an hour, it’s uplifting and fills your heart,” she said.